Foursquare’s new Windows 8 app may not be the biggest deal for Foursquare, but it’s huge for Microsoft.

With the app, which was officially announced in June, Foursquare takes some of the best parts about Windows 8 — the Metro interface, live tiles, global search — and creates something that’s completely different from anything the company has released before.

That, as Foursquare business development head David Ban told VentureBeat, is exactly the point. “I think one of the most exciting things here was figuring out what we can do for this specific platform. It’s very pretty and plays well to the strengths of this OS,” Ban said.

Again, that’s a big deal for Microsoft, which is still struggling to convince consumers why they should switch over to Windows 8. Apps like this one really support its case. 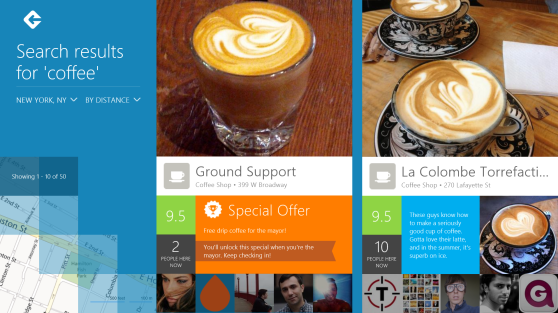 Above: Foursquare on Windows 8: Cards, colors, and coffee.

For Foursquare, its Windows 8 app fits very much within the Foursquare 2.0 strategy the company has shifted to as of late: Rather than focus on the check-in (which is a secondary feature here) Foursquare is leveraging all the insights and recommendations those check-ins have let it make. Unlike with its mobile apps, Foursquare is positioning its tablet apps as more of a lean-back affair.

But with that transition comes an interesting omission: the Foursquare news feed, which has been completely stripped out in the Window 8 app. As Ban explains it, Foursquare decided to remove the feature this time around after deciding that the app’s core strengths were in its recommendations and listings, not friend activity.  “From the get-go the goal of this app was to highlight what were super excited about and what we’re spending most of our engineering resources,” Ban said.

Ban did, however, note that while Foursquare users’ friend activity doesn’t take center stage on Windows 8, all of that activity is still factored into the app’s recommendations. We’ll see if users miss the functionality after spending some time with the app.