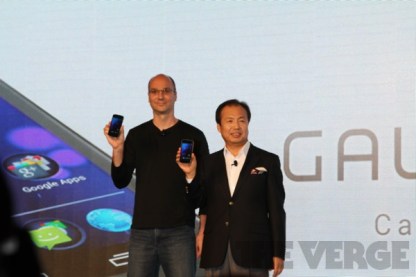 If I were Samsung, I’d be tired of Apple’s patent complaints, too. Samsung mobile head JK Shin has admitted that with its new Galaxy Nexus Android phone, the company took great pains to avoid more legal attacks from Apple, Yonhap News reports.

“Now we will avoid everything we can and take patents very seriously,” he told reporters last night, seemingly hinting that Samsung was a bit carefree with intellectual property concerns previously. “We will see if (the Galaxy Nexus) will be 100 percent free [from Apple suits],” he later added.

Samsung has been embroiled in a legal battle with Apple since April. The lawsuits started in the US, but have now spread to several other countries. Apple claimed that Samsung “slavishly” copied its designs with the Galaxy Tab tablets and Galaxy S series of phones, both of which bear similarities to the iPhone and iPad. Apple has managed to block Galaxy Tab sales in some countries, like Australia and Germany, and a US judge recently found that Samsung does infringe on Apple’s patents (although Apple is being asked to prove the validity of its design patents).

So it makes sense for Samsung to avoid that legal mess entirely with the Galaxy Nexus, which debuted last night at a Hong Kong press event, and is the latest in Google’s flagship Nexus line of Android phones.

Of the current lawsuits, which now span 30 cases across 10 countries, Shin said, “I think it is just a start and (the lawsuits) will last for a considerable time … I don’t think there is much gain (from lawsuits against Apple). What we are losing is the pride in our brand.”