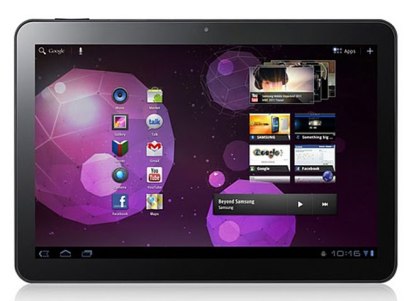 New York City residents will be the first in the US to get their hands on Samsung’s Galaxy Tab 10.1 Android tablet at the Union Square Best Buy on June 8 starting at $499. The tablet will be available at other retailers across the country starting on June 17.

It’s a strange publicity move for Samsung, but it may pay off with some impressive lines of tablet-hungry consumers next week.

Samsung touts the 10.1-inch Galaxy Tab as “the world’s thinnest tablet”, measuring in at just 8.6 millimeters. The Wi-Fi only tablet comes loaded with Android 3.1 (the most recent version of Android), and it’s powered by Nvidia’s Tegra 2 dual-core processor. The 16 gigabyte version of the Galaxy Tab will be available for $499, while the 32GB version will run you $599.

Samsung says that its TouchWiz software, including its Live Panel home screen menu and “Mini Apps” tray, will be available for the tablet as future software upgrades. This is something I’m hoping more Android device makers do, as it’s far more preferable to including custom software that kills the Android experience for consumers.

While Motorola’s Xoom tablet was the first Android tablet to effectively take on the original iPad, the Galaxy Tab 10.1 seems even more polished. It’s coming only a few months after the Xoom launched, but the tablet’s faster speed and thinner design clearly makes it Android’s first legitimate iPad 2 competitor.