Apple and Samsung sold 52 percent of all smartphones around the globe during the fourth quarter of 2012, a sign that these two companies are truly at the top of the mobile world, according to a new Gartner report.

While mobile phone sales overall declined in 2012 and Gartner tries to make a big deal about it, you can attribute the drop to waning interest in cheap feature phones. The year was still great for smartphones. In the fourth quarter of 2012 alone, sales of smartphones hit 207.7 million, which is up 38.3 percent from the same period in 2011.

Samsung came out on top in smartphone and overall mobile sales, while Apple came in firm second in smartphones. In 2012, Samsung sold 384.6 million mobile phones total, with 53.5 percent of those being smartphones. Apple sold 130 million smartphone sales worldwide.

Surprisingly enough, China’s Huawei took third place. Huawei sold 27.2 million smartphones, which is up a stunning 73.8 percent from 2011. Still, Gartner doesn’t consider it a huge win because it barely beat out competing firms.

“There is no manufacturer that can firmly lay claim to the No. 3 spot in global smartphone sales,” Anshul Gupta, principal research analyst at Gartner, said in a statement. “The success of Apple and Samsung is based on the strength of their brands as much as their actual products. Their direct competitors, including those with comparable products, struggle to achieve the same brand appreciation among consumers, who, in a tough economic environment, go for cheaper products over brand.”

For 2013, Gartner predicts sales of smartphones worldwide will be about 1 billion units, while overall mobile phone sales are estimated to hit 1.9 billion units.

On the operating system front, Google’s Android is still easily the king and has widened its reach over Apple’s iOS.

The OS category also doesn’t have clear third place winner, but Microsoft’s Windows Phone OS had a good 2012. Microsoft grew its share by 1.2 percent in the fourth quarter, and its Windows Phone sales are up 124.2 percent year-on-year. There’s also BlackBerry 10, which just launched, to start considering for 2013 as well.

“2013 will be the year of the rise of the third ecosystem as the battle between the new BlackBerry 10 and Widows Phone intensifies,” Gupta said. “As carriers and vendors feel the pressure of the strong Android’s growth, alternative operating systems such as Tizen, Firefox, Ubuntu, and Jolla will try and carve out an opportunity by positioning themselves as profitable alternatives.”

Check out the chart below for Gartner’s overall mobile phone data: 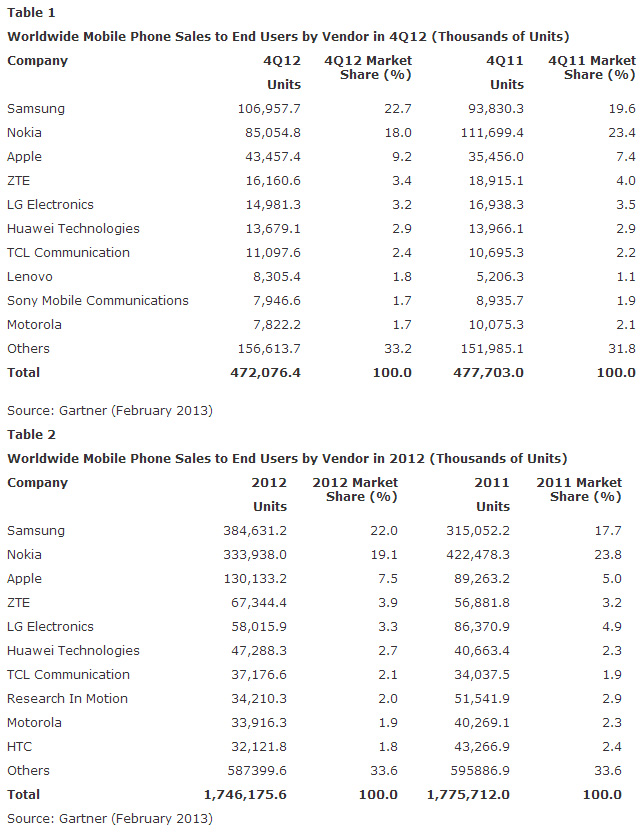