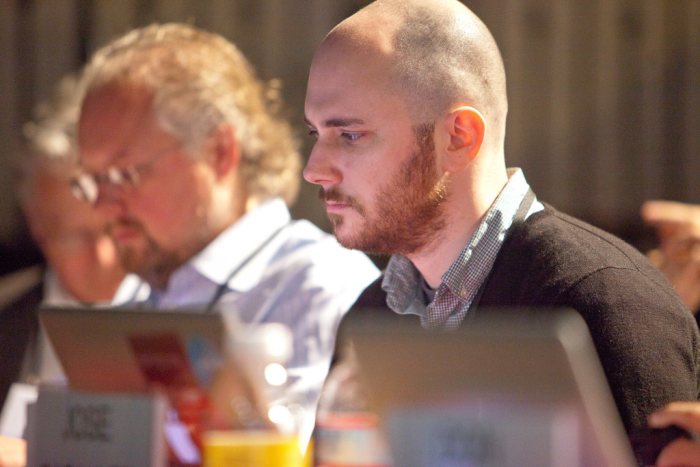 To make sense of the deal, we talked with Ryan Block, the cofounder of GDGT and a former editor at AOL’s Engadget, this morning. What followed was an insightful conversation on where AOL has been and where it’s headed — with GDGT’s help.

VentureBeat: What will change in GDGT’s operations? And how will the site fit into AOL?

Ryan Block: We’ve always considered ourselves a design and engineering company first. That’s different from Engadget, which was a content company, and the design and engineering were in service with that. … The fit there for us is not only GDGT as a property itself — we’re filling an interesting hole in AOL’s lineup — but it’s also about our team.

So part of what I’m going to be doing is taking existing AOL design and engineering folks, as well as the team I built at GDGT, and kind of expanding the scope of what we’re working on … We’re going to apply the same sensibilities around creating a great holistic product experience to other sites around the [AOL tech] portfolio.

VentureBeat: Is this a response to the Verge and all the money Vox Media is throwing at design?

Block: This is the biggest investment I know of that AOL has ever made in these properties and in the future of its technology content as well. It’s not just with GDGT as a property itself, but with the way we’re going to start to organize and build. Those guys [AOL] realize we’re going to compete, and we’ll continue to compete in the tech space of the future.

It’s not just about the words on the page — which is more important than ever since there’s more competition than there’s ever been — but the bar has been raised in general around design, engineering, site experience, features — all these things.

We live in a world now where everything has an app, and those apps are great and amazing holistic experiences that combine the best of the form factor with cloud services. … We’ve come to expect a very high standard of interactivity. And the reality is there’s a lot of work to be done with some of these sites, and that’s what we’re going to do.

If you’ve ever used GDGT, you know it’s highly interactive, highly dynamic, it’s those kinds of experiences we want to bring.

VentureBeat: Why is now a good time for the AOL acquisition?

Block: We’ve been continuously iterating and evolving and getting really happy with where the site was going. Around the same time as we were thinking about what could happen next, AOL reached out, and we entered conversations. We actually had some other offers, and frankly, we had offers that might have been a little more financially interesting. But we chose AOL. We thought it was the best fit. The leadership team there is amazing. They’ve really done a 180 in the last two years. And a lot of the people that I don’t think were up to the task have been shown the door, and the people there now are great.

I don’t know if you saw Jay Kirsch’s post on church and state [Kirsch is president of AOL’s technology and entertainment group], but to have a high-ranking business manager who thinks about content that way, it feels very uncommon to me. It feels very rare and precious that somebody actually gets it at that level. For us, it’s the right team, the right deal, the right time, and the right place. We didn’t really want to do something else, this was the outcome that we wanted.

VentureBeat: Any chance you’ll return to blogging in your new role?

Block: I’m definitely going to contribute to Engadget, TechCrunch, and other sites within the network wherever I can. Peter [Rojas, GDGT’s other co-founder] is definitely going to contribute, probably more than I will, and taking more of an active advisory role in the direction of editorial across the group. That’s actually very similar with what we’ve done with GDGT. … I’ll be more like a columnist than anything else.

I’m not taking a direct editorial role. For example, Tim Stevens is still in charge of Engadget. The way I’d think about it is in terms of a mind/body duality, where the words on the page and everything having to do with the edit product is the existing Engadget team [the mind]. My team are the personal trainers, and we’re going to work out the body. We’re going to take everything that surrounds that [the mind], all the experiences that encompass it, and work on that.

VentureBeat: Are you worried at all about how the GDGT community will respond to the acquisition? I noticed that you made it really easy for existing members to delete their accounts.

We’ve done this before. The last time we brought it into a group that understood our business and then almost immediately, that whole management team was reshuffled, and we got stuck with a bunch of people who really had no business running a Popsicle stick. That’s changed enormously.

Even back then we were able to take a property within AOL and make it great. Engadget ultimately won out against all its competitors, and that was with not a terribly impressive investment on AOL’s part in 2005 and 2006. I’m not super-worried about it. I think AOL is a pretty good place for certain brands to land. I think they’re going to be excellent stewards for GDGT, and they’re going to be a good home for our team.

I think they have the receptors necessary for our DNA. That is maybe the most important thing to me.