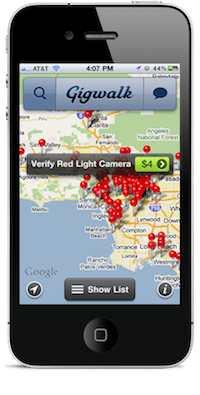 A startup called Gigwalk is launching a service today to help businesses manage and recruit workers for basic jobs that can be accomplished on their iPhones. The company has already attracted $1.7 million in seed funding from some well-known investors.

The basic system is pretty straightforward. Companies post jobs that they want done and the amount that they’re willing to pay, then users come in and do the work. Gigwalk uses the location data from users’ iPhones to confirm that they actually did the job, or that they were at least in the right spot. Possible jobs include verifying street names, photographing menus, reporting red-light cameras, and confirming in-store product placements.

For example, Gigwalk has already worked with navigation company TomTom to check some of the data in TomTom’s maps, and it could tell if the users trying to report information about a specific intersection were actually at or near that spot.

One obvious way to think about this is as a kind of crowdsourcing, but co-founder and chief executive Ariel Seidman said he shies away from that term, because Gigwalk isn’t just randomly assigning tasks to a group of strangers. He said it’s building “a community.” Gigwalkers, as he calls then, will actually recommend and help each other out on various tasks. And over time, users can build trust on the site, earning access to more lucrative jobs. Seidman said a better comparison would be oDesk, where companies can post jobs for and manage remote workers — except sites like oDesk tend to be programming-heavy, while Gigwalk’s jobs are mobile and probably more easy to accomplish by a general audience.

Gigwalk is currently available in Los Angeles, San Francisco, New York City, Chicago, Philadelphia, Boston, and Miami. Until now, the Mountain View, Calif.-based company has only been testing the service out a few select partners, and starting today it’s opening the doors to any business in those cities that wants to post a job. Each task pays between $3 and $90, and Gigwalk also takes a transaction fee of undisclosed size.