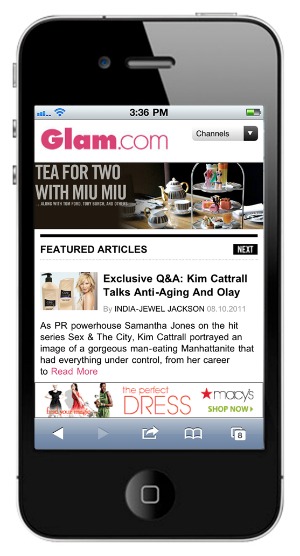 Mobile is the next big step for Glam Media, a female-focused media and advertising company. Glam today is launching its GlamMobile advertising platform and GlamEnable, a platform that lets publishers create websites and apps optimized to run on mobile devices.

Glam CEO Samir Arora tells VentureBeat that he’s interested in mobile because it’s quickly growing in terms of consumer engagement and interest by brand advertisers. Now that Glam has hit $100 million in revenue and is gearing up for an IPO, it makes sense for the company to finally begin taking advantage of the explosive growth in mobile devices.

GlamMobile will allow brands to run ad campaigns across most major mobile operating systems, including iOS, Android, Windows Phone, and BlackBerry, and it will be powered by GlamAdapt, the company’s ad platform for choice content. Arora says that GlamMobile will focus mostly on delivering ads relevant to content and specific lifestyle verticals.

The mobile ad platform is being positioned as a direct competitor to Apple’s iAds, Arora says, and it already has some major advantages since it’s cross-platform and integrated with its desktop ad platform. GlamMobile also supports both in-app and mobile web ads, while iAds only offers in-app ads. Launch sponsors on the platform include Lexus and Macy’s.

GlamEnable will be a major push to optimize the web for mobile devices, the company said in a statement. It’s a simple way for publishers to create mobile websites compatible with most mobile platforms, and it also allows them to create native apps for iOS and Android. Glam’s own sites —  including Glam.com, Bliss.com, and Brash.com — are all now sporting GlamEnable mobile optimization, as well as 75 of the company’s leading publishing partners like Bag Snob and SheFinds.

Brisbane, Calif.-based Glam was founded in 2003 and serves over 200 million monthly visitors. The company raised $50 million at a $750 million valuation in February of last year.