But there was some good news for former global best seller Nokia. 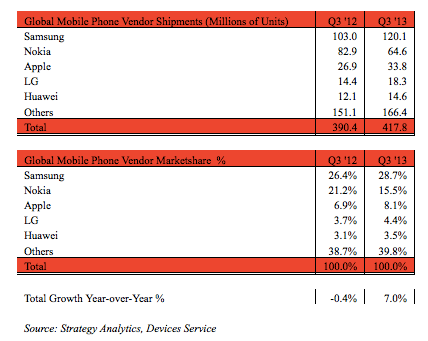 Of course, feature phones, which are a diminishing segment as 60 percent of phones sold this past quarter were smartphones, remain a problem. Global volumes for Nokia alone dipped 27 percent year-over-year.

Apple shipped a record 33.8 million iPhones this past quarter. That’s faster than the industry at large, so Apple actually grew global market share from 7 percent to 8 percent, but that’s much slower than Samsung, which grew 55 percent year-over year.

There’s good news in store next quarter, however.

“We expect Apple to gain further mobile-phone share in the upcoming fourth quarter of 2013 due to high demand for its new iPhone 5s model,” senior analyst Ken Hyers said.

Other standouts include Chinese manufacturer Huawei, which shipped 14.6 million phones in the quarter for 3 percent global market share, and LG, which grew from 14.4 million units to 18.3 million phones year-over-year.