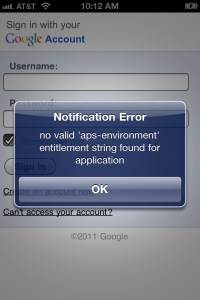 Updated: Google is pulling the new Gmail app, just hours after it was released. The official Gmail Twitter account posted this apology:

The iOS app we launched today contained a bug with notifications. We have pulled the app to fix the problem. Sorry we messed up.

VP of Apps, Dave Girouard, posted the following on Google+:

Sorry but we pushed a bad version of our iOS app for Gmail. More info shortly – we’re working on it.

After years of waiting, Google has finally released a Gmail app for the iPhone, iPad and iPod touch. Unfortunately, it seems all that time was not spent on careful development of the mobile application, which is a buggy version of the popular email service’s web app.

First impressions are not good for the free mobile app. Many users, including this one, are getting error messages when they launch the app (right). There’s no support for multiple accounts and Messages with images don’t scale down to fit the smaller iPhone or iPod touch screens, which makes it pretty useless for anything but plain text messages.

In its blog post announcing the release, Google says the app improves on current Gmail access with more speed, improved efficiency and added touch features. There are some new tricks, like attaching an image to an outgoing message, and alerts (though the error message is related to the alert functions).

The app’s design also falls flat. The layout will look familiar to anyone who has logged into Gmail using Safari on their iOS device. Swiping left to right brings up a tray for navigating your mailboxes, while right to left swipe brings up the same archive option as the web app. The iPad version does have a nice side-by-side view of the inbox and message threads.

The app is compatible with iPhones, iPod touches, and iPads running iOS 4 or later.