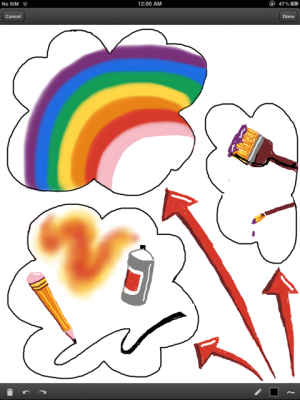 Google has released an update for its Gmail iPhone, iPad and iPod Touch applications today that adds several new features requested by users.

The new features include a new notification sound for new email messages, access to the vacation responder and the ability to set custom signatures, which should be helpful for people who want to distinguish messages sent from a mobile device (e.g. “Sent from my iPhone, please excuse any typos.”). The update also includes support for nested labels and some user interface improvements.

Another big addition users will notice is the Scribbles feature. The feature lets users open a canvas to draw (or “scribble”) something using multiple colors and brush sizes. When finished, the scribble can be attached to an email and sent via the app.

The company first released the Gmail iOS app in November but quickly pulled it from the App Store due to widespread login problems. Two weeks later the app returned, but proved to be a huge disappointment for most people, including VentureBeat’s Heather Kelly. In addition to the lack of support for multiple accounts and poor image message scalability, she called the app pretty useless for anything but plain text messages.

However, Google said it plans to add multiple account login support, banner notifications and a “send as” feature in future iOS app updates.