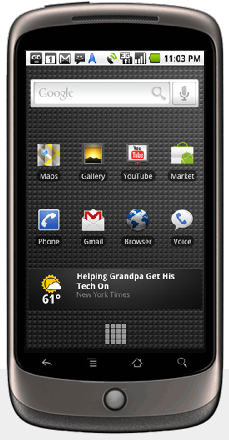 Smartphones based on Google’s Android mobile operating system have outsold Apple’s iPhone in the U.S. during the first quarter of 2010, according to a report by research firm The NPD Group. The data places Android, with 28 percent of the smartphone market, in second place behind RIM’s Blackberry smartphone market share of 36 percent. Apple now sits in third place with 21 percent.

NPD points to a Verizon buy-one-get-one-free promotion for all of its smartphones as a major factor in the first quarter numbers. Verizon saw strong sales for the Motorola Droid and Droid Eris Android phones, as well as the Blackberry Curve, thanks to its promotional offer. Verizon launched a $100 million marketing campaign for the Droid when it hit the market in November 2009, which likely attributed to strong sales in the first quarter as well.

NPD’s data comes from self-reported online consumer surveys — not actual sales numbers — which means there’s the potential for some difference. The firm has proven itself trustworthy with past reports generated from consumer surveys.

When we last looked at smartphone market share for the end of 2009, Android was gaining steadily. Given Verizon’s major push with the Droid, not to mention the buzz that the Nexus One generated (even if it didn’t sell like hotcakes), it makes sense that Android would begin to approach the iPhone’s numbers.

Apple also hasn’t announced a new iPhone product since the launch of the 3GS in mid-2009, and many buyers are probably holding out for the next-generation iPhone — which will debut in the next few months. The quick glimpse we got at the next-gen iPhone hardware via the Gizmodo fiasco certainly didn’t help sales either.