As expected, Google announced today that it’s getting into the consumer wireless business with a new service called “Fi.”

The prices are attractive. In general, users will pay $20 per month for the service, plus $10 for every gigabyte of data they use.

Fi will be available in most U.S. cities, but only on the Google-designed Nexus 6 phones for the time being. And new customers must be invited to sign up in the introductory phase of the service.

The new wireless service will be governed by software that allows connections to alternate between the Sprint and T-Mobile networks, depending on which has the strongest signal at a particular time and place. This software approach is increasingly being used by carriers to maximize the network capacity and speed derived from limited spectrum resources. 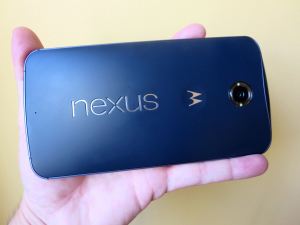 Above: The new wireless service will be available only on Google’s Nexus 6 phones.

Wi-Fi networks, Google says, will be used to route both voice and data service, which could reduce network congestion and help keep prices low.

Google is offering one plan for now, called Fi Basics. For $20 a month users get talk, text, Wi-Fi tethering, and international coverage in 120+ countries. Customers pay a flat $10 per gigabyte of cellular data while in the U.S. and abroad.

Sprint and T-Mobile are the national carriers that have the least to lose from letting Google use their networks — and possibly take some of their subscribers — as the two have long trailed far behind market leaders AT&T and Verizon by subscriber count. Unfortunately, the T-Mobile and Sprint networks don’t have the reach and tower density that the AT&T and Verizon networks do.

T-Mobile’s outspoken CEO John Legere seemed happy about the arrangement in a statement released today, but mainly for the association of his brand with Google’s.

“Not only is this a great opportunity to put the T-Mobile network into the hands of even more Americans who spend their days and nights Periscoping, YouTubing, tweeting and streaming, the brand association is a strong one,” Legere writes. “It’s been fantastic to pull together some of the biggest brains in tech to drive innovation that could directly benefit tomorrow’s American wireless customers.”

A report in the Wall Street Journal Tuesday said the Fi service would be announced today and that the move would “inject fresh uncertainty into a wireless industry already locked in a price war.” Many wireless consumers might wonder what “price war” the Journal is referring to, as most individual subscribers still pay around $75 per month for service.

Analysts don’t believe that the Google service will become available to, or practical for, enough consumers to pose any immediate threat to the market positions of AT&T and Verizon.

Reports of Google’s MVNO aspirations originally surfaced in February. Google Android chief Sundar Pichai referenced the initiative for the first time publicly during a keynote address at Mobile World Congress in early March. But he gave no details on the service or when it would become available.

Google’s end game in selling wireless service might be similar to its end game in selling its super-fast fiber broadband in select markets: It likely aims to apply pressure to market incumbents (AT&T and Verizon) to lower prices, improve service, and make terms more subscriber-friendly. This, of course, would give more people access to the wireless broadband that serves Google apps and services.