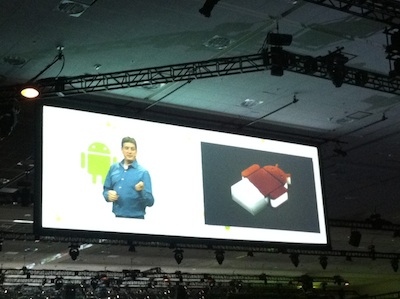 Google today announced the next version of its Android mobile operating system. As previously reported, Google is carrying on the dessert theme for Android names and dubbing the update Ice Cream Sandwich (the current version is called Honeycomb).

Google didn’t give a full rundown of Ice Cream Sandwich’s features at today’s Google I/O conference in San Francisco, where it made the announcement, but it gave a quick overview of what’s coming. The update will be coming in the fourth quarter of this year, and the big theme of the release is to create an operating system and applications that work the same on any Android device. Google said Ice Cream Sandwich will include a number of features to make that happen, including bringing Honeycomb’s tablet features to other devices, as well as open source code.

Beyond the “any device” theme, Google also showed off another impressive technology promised for Ice Cream Sandwich. Googlers on-stage showed that an Android device with a camera could actually tell where a user was looking and also where voices were coming from — so for example, when two people were on-camera, the camera would adjust its zoom based on who was speaking.

In addition to announcing the new version of Android, Google also shared new numbers about the operating system’s rapid adoption.