Google is expanding the linguistic capabilities of the virtual assistant that powers its Allo messaging app with the news that it’s now conversant in Hindi and Brazilian Poruguese.

Google first announced the Google Assistant back in May, serving up a direct competitor to the likes of Microsoft’s Cortana, Apple’s Siri, and Amazon’s Alexa. Google’s incarnation is currently available to anyone via the Allo messaging app, which launched in September, though it is also integrated into the company’s Pixel smartphones and the Google Home wireless speaker.

Allo represents Google’s effort to create a smart messaging app that helps you stay in touch with all your friends, while also helping you plan events and find information. It promises to “keep your conversation going” through its intelligent assistant and offers a “smart reply” feature that suggests responses to messages based on the context of the conversation.

The app automatically detects what language you’re chatting in and offers suggested responses based on the language. For example, if you’re conversing in English, the app will only suggest English responses, but if you switch to Hindi, it will alter the suggestions accordingly. As of today’s news, the Google Assistant in Allo can now speak English, German, Hindi, Hinglish, and Brazilian Portuguese. 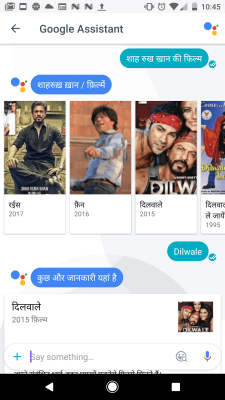 The Hindi expansion is notable for Google Assistant, given that Hindi is among the top five most-spoken first languages in the world. The addition is also in line with Google’s long-stated aim of targeting the next billion internet users, as the internet giant continues to push its services in India. Indeed, back in September Google announced a new offline-first YouTube app for India called “YouTube Go” that’s built from the ground up to work where there is poor connectivity or none at all. The company has also been rolling out free Wi-Fi to hundreds of train stations across the country, and it recently launched Google Station to extend the program beyond railway stations and outside of India. Elsewhere, the company launched its first-ever dedicated public transport app — for New Delhi residents only — and it also brought offline maps to users across India.

“Over the last two months since we launched, Google Allo has received tremendous feedback, especially in India, which has one of the highest number of Google Allo users,” explained Google product manager Amit Fulay, in a blog post.

Both Google and Facebook are going all-in to garner mindshare with new and emerging smartphone-toting internet users in India, and speaking Hindi will certainly help Google gain further traction in the country. Adding Brazilian Portuguese — rather than standard Portuguese — is indicative of Brazil’s 200 million-plus population, but it is strange that Spanish isn’t yet catered for, given that it’s the world’s second most widely spoken native language.