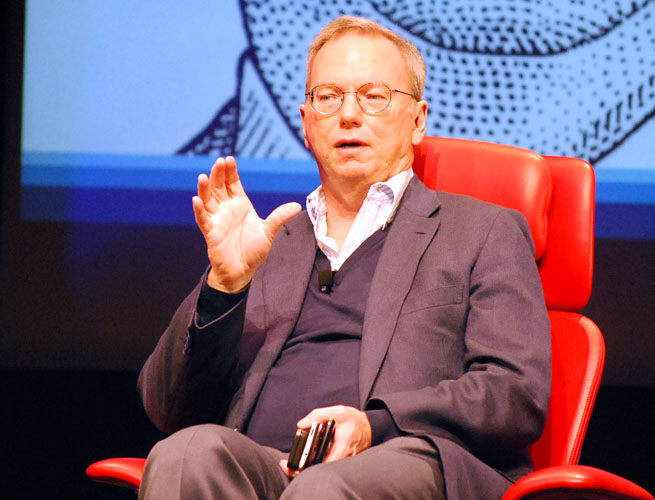 “I think it’s fantastic — I love it,” Schmidt said. “This is what open source is about. Open source is open source. It’s experimentation, it’s creativity. … I think it’s one of the main reasons that Android is doing so well right now. And it took some guts to do it.”

Facebook Home, a skin of Android that puts social networking above all else, debuted two weeks ago and launched on select Android phones this past Friday. We suspected that Google might not like Home very much (users certainly aren’t hot for it) because it changes the experience of Android and puts a major emphasis on Facebook services over Google services.

Business Insider’s Steve Kovach asked Schmidt directly what would stop Google from removing Facebook Home from the Google Play store if the the app got too popular. Schmidt didn’t seem happy with the question’s premise but responded tersely:

“It would be counter to our public statements, our religion,” Schmidt said. “The answer is ‘no.’ We would not remove Facebook Home.”

Schmidt also discussed other things during his talk. Notably, he said that Android is now seeing 1.5 million Android activations per day with 20 operators in 160 countries.

“We’ll cross a billion [activations] towards the end of this year,” Schmidt said. “That gives you a sense of the reach. Android is the primary vehicle of smartphones. … We’ll quickly get to the $100 price point, which is the key for those next five billion people looking to get connected.”

He also said early predictions he made about wearable technology (things like Google Glass) would likely come true. He identified connected pills that you take as something that could become commonplace.

“I used to say you’ll have 10 IPs on your body and it looks like that’s going to happen,” Schmidt said. “‘I took the pill’ is the very definition of opt-in.”