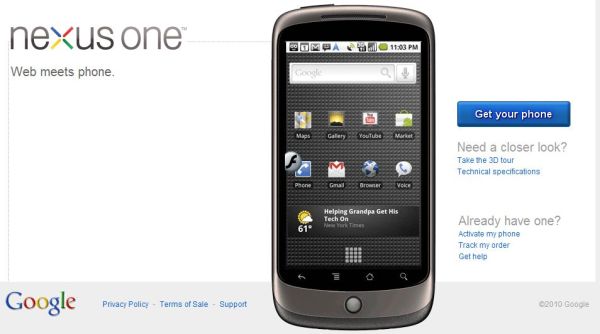 When Google launched the Nexus One, it aimed to sell the phone primarily via its online store (google.com/phone), and eschewed traditional retail channels. Unfortunately, that led to lower than expected sales, and now the company is having second thoughts. Android engineer and evangelist Andy Rubin announced in a blog post today that Google will shift its Nexus One strategy to focus on retail stores and will eventually close the online store.

As with every innovation, some parts worked better than others. While the global adoption of the Android platform has exceeded our expectations, the web store has not. It’s remained a niche channel for early adopters, but it’s clear that many customers like a hands-on experience before buying a phone, and they also want a wide range of service plans to chose from.

Rubin says that Google is already selling the Nexus One via carrier retail stores in Europe, and it will simply be replicating that model globally.

The news follows high profile snubs from Verizon and Sprint, who both decided not to offer the Nexus One since they have better Android phones available. If the Nexus One was selling better, the carriers might have jumped at the opportunity to offer it. Google could have also helped the situation by making a CDMA version of the phone (which would run on both Sprint and Verizon) available much closer to its original launch.

It’s a shame that Google is giving up on the online store entirely, particularly since it had the potential to shift carriers towards offering more unlocked and unsubsidized phones. It could have easily pursued further retail presence while keeping the online store available as an option. Instead, it will become an “online store window” to promote a variety of Android phones globally. A one-stop location for viewing Android phones isn’t necessarily a bad idea —  it’s something Google has needed for a long time — but it’s no reason to kill the online store.