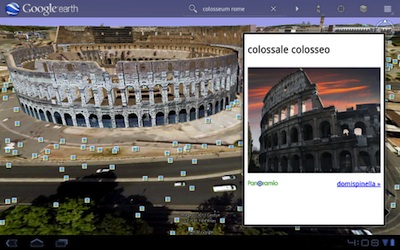 The product was demonstrated at the Social-Loco conference during the presentation from Marissa Mayer, Google’s vice president of location and local services. I’m not a heavy user of Google Earth myself, either on my laptop or on smartphones, but I was impressed by today’s demo, where the demonstrator searched for different locations like the Taj Mahal and San Francisco’s Mission Bay Conference Center (where Social-Loco is being held), zoomed in using the touchscreen, and explored 3D models of each spot. It looked like a fast, immersive experience.

The demonstrator also highlighted how Google Earth can be timely and integrate with Google’s social features. Users can browse photos of different locations that were uploaded by other users. And people are submitting new 3D models all the time, in a way that helps give context around the news — for example, following the announcement of Osama bin Laden’s death, they uploaded a 3D model of the compound where he had been hiding, so people can visualize the compound and also see where it’s located in relation to the rest of Pakistan. (We’ve already written about how Google Earth imagery revealed the extent of the earthquake damage in Japan.)