Google Fi Unlimited, as the plan is called, offers completely unlimited calls and texts, while data is effectively unlimited, though with one notable caveat — speeds will be throttled after 22GB of usage in a given month, similar to what the main U.S. mobile carriers enforce. Moreover, Google said that it “may optimize video streaming quality to 480p,” according to a blog post it published today.

Google Fi, for the uninitiated, is Google’s mobile virtual network operator (MVNO) service that launched originally as Project Fi back in 2015, before its rebrand last year. In a nutshell, Google Fi automatically flits between Wi-Fi and the cellular networks of Sprint, T-Mobile, and U.S. Cellular to optimize a user’s reception and internet coverage.

So far, Google Fi pricing has been fairly straightforward: Users pay $20 per month for unlimited calls and texts, and then they pay $10 for every gigabyte (GB) of data thereafter. As of last year, Google introduced a new feature it called Bill Protection, which effectively ushered unlimited mobile data into the mix by introducing a $60 cap — subscribers could enjoy up to 15GB for their $60 monthly outlay, after which their data speed dropped significantly.

Google Fi Unlimited follows in a similar vein, except that data is not metered. Under the existing Bill Protection setup, users only pay for the data that they actually use up to 6GB (and then unlimited thereafter), but on the Unlimited plan users can now decide in advance that they’re going all-in — they will pay $70 regardless of how much (or how little) data they use. So for those who do consume a lot of data, Google Fi Unlimited should represent a good deal, as it will only cost $70 all-inclusive, rather than $20 (for calls and texts) plus a further $60 for unlimited data. Moreover, Unlimited customers can use 22GB of data without their speeds suffering, compared to 15GB previously.

It’s also worth noting here that, similar to the existing plan, the Google Fi Unlimited plan price can come way down for families looking to bundle their lines together — so a family of four to six people, for example, could pay just $45 per month each. 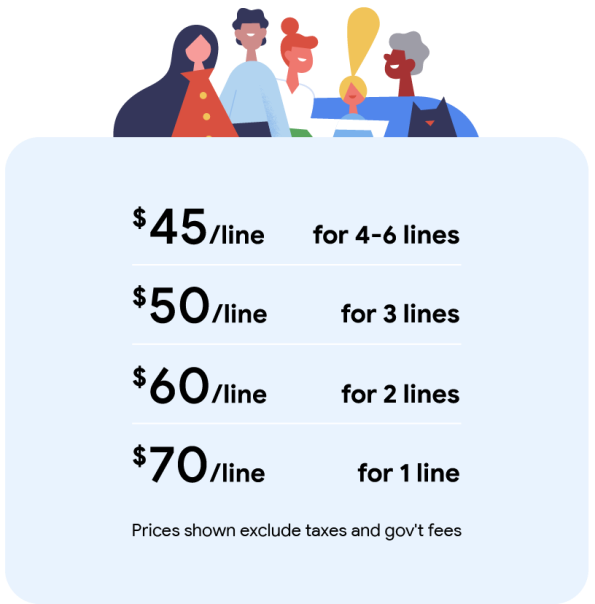 Google’s reach into all manner of technology verticals spanning cloud storage, photo management, and email puts it in a somewhat unique position to cross-sell and encourage uptake of any new services it brings to market. And that is exactly what it’s doing now with Google Fi and its unlimited plan.

Indeed, those who elect to pay $70 per month for Google Fi Unlimited will also now get a Google One membership gratis, which includes 100GB of cloud storage that can be used across its various products including Photos, Gmail, and general files.

While this Google One membership tier would only cost around $2 per month on its own anyway, it will still serve to encourage product lock-in, as people will be more inclined to store their digital lives in Google’s giant hard-drive in the sky. Indeed, last week Google announced that Android users specifically would be able to automatically back up all their texts, “original quality” photos, and videos as part of a Google One membership — and this will now be made available for free to Google Fi Unlimited customers.

Finally, as it gears up to launch the next iterations in its Pixel smartphone lineup next month, Google is offering a 50% discount on the Pixel 3 and Pixel 3XL via a Google Fi activation, which represents pretty good value for money considering both devices are already available at a $300 discount. So in effect, you could buy a Pixel 3 Pixel 3XL for $250 or $300 respectively.