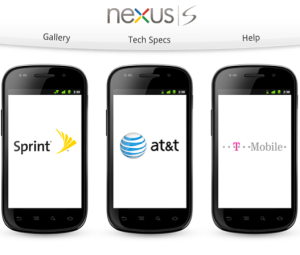 Google added a link to on its search page today promoting a free Samsung Nexus S smartphone one-day deal at Best Buy. It’s an effort to boost adoption of the device.

The Google-branded Nexus S, which is available on AT&T, Sprint and T-Mobile – but not Verizon – is free when signing a two-year contract. The device runs Google’s Android operating system and is currently the only smartphone that works with Google Wallet — an electronic-payments technology that can handle financial transactions and credits from rewards programs.

Google aims to lock in as many people as possible into long-term commitments to help push its adoption of Google Wallet — especially since the next version of Apple’s iPhone is widely expected to debut in the next few months.

The promotion itself isn’t very spectacular for Sprint customers, who can get the phone for a subsidized price of $99 with contract. Best Buy is the only seller of Nexus S phones for T-Mobile and AT&T. So, the free promotion would save them the $529 unsubsidized cost of the device.

The promotion could also be an attractive option for people who have an older model iPhone and are sick of waiting to get an upgrade. When the iPhone 5 does launch, the price of the upgrade will probably cost consumers $199.

If you took advantage of Google’s Nexus S promotion, let us know in the comment section.