Google Glass competitor GlassUp is unveiling its first public prototype today at CES in Las Vegas. Clearly, the Venice, Italy-based startup has a long way to go to catch up to the current smart glasses leader.

“It is sort of cyborg,” GlassUp CEO Francesco Giartosio told me last week via Skype. “But all this goes away,” he added, referring to the company’s plans to streamline the device going forward. 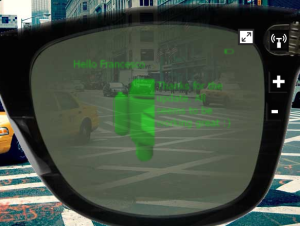 Above: You get one guess as to what OS GlassUp runs on …

GlassUp actually started building its wearable heads-up display before Google announced Glass. And the company’s goal is the very opposite of cyborg — and the opposite of what has long been one of the top objections to Google Glass: that Glass makes you look like a Star Trek dweeb. GlassUp will look like an ordinary pair of fashion lenses, Giartosio says, and therefore won’t stand out as a tech accessory, but rather a fashion accessory.

At the moment, though, that’s a future goal rather than a current reality.

The current GlassUp is a prototype that is re-sizable so that people with large or small heads can try the new technology. That’s important, GlassUp says, because the angle at which you see notifications, the sizing, and the fit all contribute to a better experience.

But it does have an impact on what the device looks like: geeky, almost an updated version of steampunk, and not finished or polished.

GlassUp, which raised over $100,000 on Indiegogo, is currently raising another $165,000 via crowdfunding-for-equity startup Seedrs to take its prototypes all the way to its intended goal, which is providing wearable technology that fades into the background as a simple fashion accessory, while still providing all the benefits of a smart glasses platform.

“We wanted to come to CES with two to three different frames for different types of people,” Giartosio told me. “But we could not make that, so we’re staying with this adjustable frame that you see here.”

Shipping dates for final models are in the June/July time frame, the company says, and that will give GlassUp time to build multiple size options. The company is targeting a price of $399, less than what Google will charge, said Giartosio.

Above: The final product

Given the fact that Google did not make its original shipping date of late 2013, GlassUp might be feeling lucky that Glass is still not in the market in large numbers — although there is no shortage of other competitors, ranging from a tiny five-person startup in Massachusetts with a $200 smart glasses product to the already-shipping $600 Recon Jet. But Giartosio believes there’s some problem behind Google delaying its launch.

“I think that there is something holding Google back, because they have a prototype that is working,” he says. “I think they are afraid that people will stop using it after a week. In fact, I have heard that some developers that work for Google were aiming more at industry sectors … selling more to companies than to people.”

GlassUp will be better than Glass, Giartosio says, because it projects updates, directions, and emails close to the center of your vision, which reduces eyestrain and is more natural. In addition, the device does not include a camera, which means that there are none of the privacy issues that Google has faced with Glass.

The company also announced availability of its API, which developers can use to connect their applications to GlassUp.