Google Hangouts may soon get the one feature it always seemed designed to have: SMS support.

The addition could finally make it to Google’s messaging app with Hangouts 1.3, reports AndroidPolice, which acquired purported screenshots of the update. 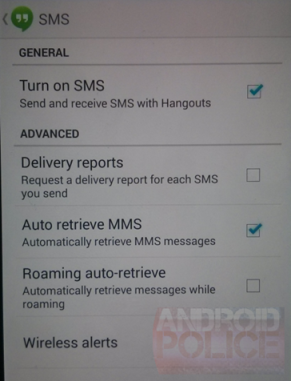 SMS support in Hangouts seems like such an obvious feature that it’s a wonder Google hasn’t introduced it yet.

Months ago, back before Google officially announced Google Hangouts, the app was known as “Babel”– and for good reason: With the app, Google combined most of  the various messaging services it created over the years — including Talk, Google+ Messenger, and its Hangouts video service.

SMS wasn’t included in that unification, even though it’s a feature at home in both Facebook Messenger and iMessage.

Google may be about to fix that.

To put it another way, SMS would finally fill one of the last missing holes of Hangouts, fulfilling the promise that the “Babel” moniker always hinted it: Communication that works seamlessly regardless of whatever messaging protocol you happen to be using at the time.

Two questions remain, however. Does the new Hangouts integration mean the death of the default Android Messenger app? More, what will become of Google Voice, which right now seems to be the last Google service not yet under the new Google Hangouts umbrella?