Google today launched Google Allo, a messaging app for Android and iOS with Smart Reply and Google Assistant. You can download Allo from Google Play and Apple’s App Store, though you may have to wait a bit, as this is a gradual rollout. Like its cousin, “the app will be live worldwide in the next few days,” the company says. Keep in mind, however, that both Smart Reply and Google Assistant are English-only for now, with “more languages coming soon.”

Allo is Google’s attempt to create a “smart” messaging app that helps you not only stay in touch with your contacts but plan and find information, as well. It is supposed to “keep your conversation going, by providing assistance when you need it,” as well as letting you “say more and do more right within your chats.” In other words, Google is hoping Allo will grow into a platform, like many messaging apps already have.

Unlike Duo, which only requires a phone number to start, Allo also uses your Google account. You can disconnect your account from Allo, however, and the only difference is that the app won’t be able to tap into your personal information in your other Google products — like Calendar, Gmail, and Photos.

Allo, along with video calling app Duo, was unveiled at Google’s I/O 2016 developer conference and made available in private beta, with the promise of a summer launch. Duo was released last month, and now Allo has made it in the nick of time: The last day of summer is September 21. Both apps are coming out of the Communications product team formed almost two years ago under vice president of product management, Nick Fox.

Fox explained that Duo launched ahead of Allo because development for the former actually started first. Duo has already seen 10 million downloads on Android, but Fox wouldn’t share how many downloads it has seen on iOS, stating merely that the team is “happy with progress on both Android and iOS.”

Fox declared, “[We are] on the cusp of the next phase of innovation in messaging,” before diving into what makes Allo stand out.

Smart Reply is a feature that Google first debuted for Inbox, its Gmail successor, back in November 2015. In short, Allo often suggests replies based on the context of the conversation (up to three suggestions). Smart Reply tries to learn each time you use it and offers responses for texts as well as for photos. 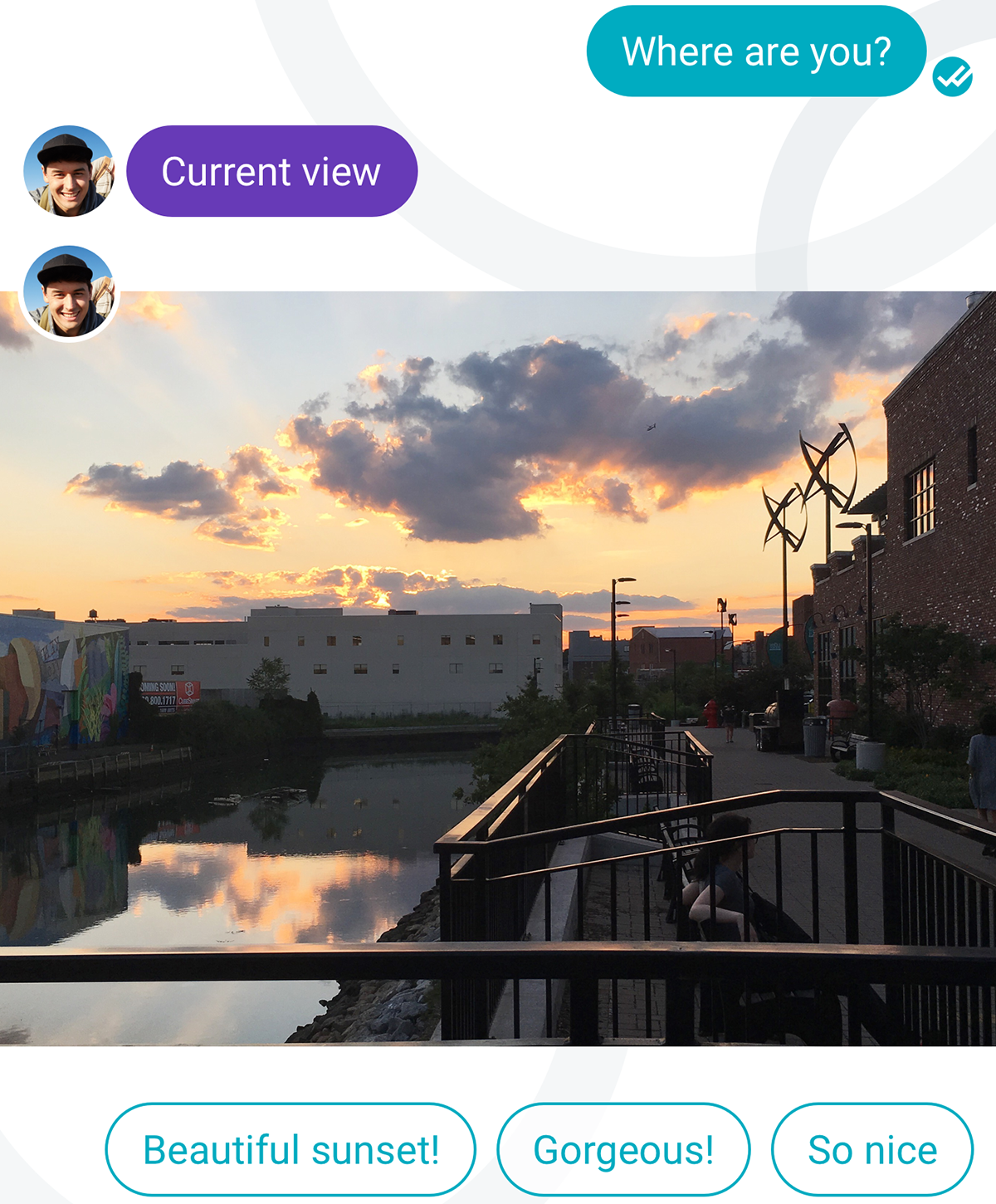 Fox called Smart Reply “additive, not reductive,” comparing it to spell check. That’s a decent parallel, though we’d argue the feature has a long way to go before it can be as accurate and effective as spell check.

Smart Reply means you can have whole conversations by just tapping on suggestions, though the resulting chats don’t sound quite right. Everyone speaks a little differently, even after considering factors such as age, region, and education. And every group of friends has their own slang, which is where Allo is meant to shine: It’s supposed to learn not just from which suggestions you tap, but also from what you type. That said, the personalization is limited for now, as Google is still refining the algorithms behind the feature.

This is probably the most boring part of Allo, but messaging apps nowadays need to have a slew of non-text options. For example, Google partnered with independent artists and studios around the world to create over 25 custom sticker packs. Allo tries to stand out by letting you enlarge or shrink emojis and text by simply dragging the send button up or down. Furthermore, you can write on photos before you send them, à la Snapchat. Allo encrypts chats, but not by default. Instead, you can opt to chat in Incognito mode (as Smart Reply was borrowed from Inbox, Incognito comes from Chrome). Messages sent in Incognito mode have end-to-end encryption, discreet notifications (they won’t show up on your lockscreen), and message expiration (anyone in the chat can set how long messages will last).

Just like an Incognito tab that you need to first open in Chrome, you need to start a new Incognito chat to get these benefits. Unlike Chrome, however, closing the chat does not mean you lose it — the conversation stays around until you explicitly delete it, and even then, it’s still there for whoever you were talking to. While the upside is more security, the downside is you can’t use features like Smart Reply and Google Assistant, because those features by design require context and tracking of what you type.

Allo is not just the first place that the new Google Assistant is available to the public, this is the “first time you’re able to have conversation with Google,” Fox pointed out. It’s like chatting with Google Search and Google Now in one. You ask the Assistant questions, and it tries its hardest to help you out directly in the chat, whether it’s to get an address, pick a restaurant, or just kill some time.

There are two ways to trigger Google Assistant. You can chat with it directly (it’s your first contact when you launch Allo), or you can bring it into any conversation by just typing @google ahead of your message. 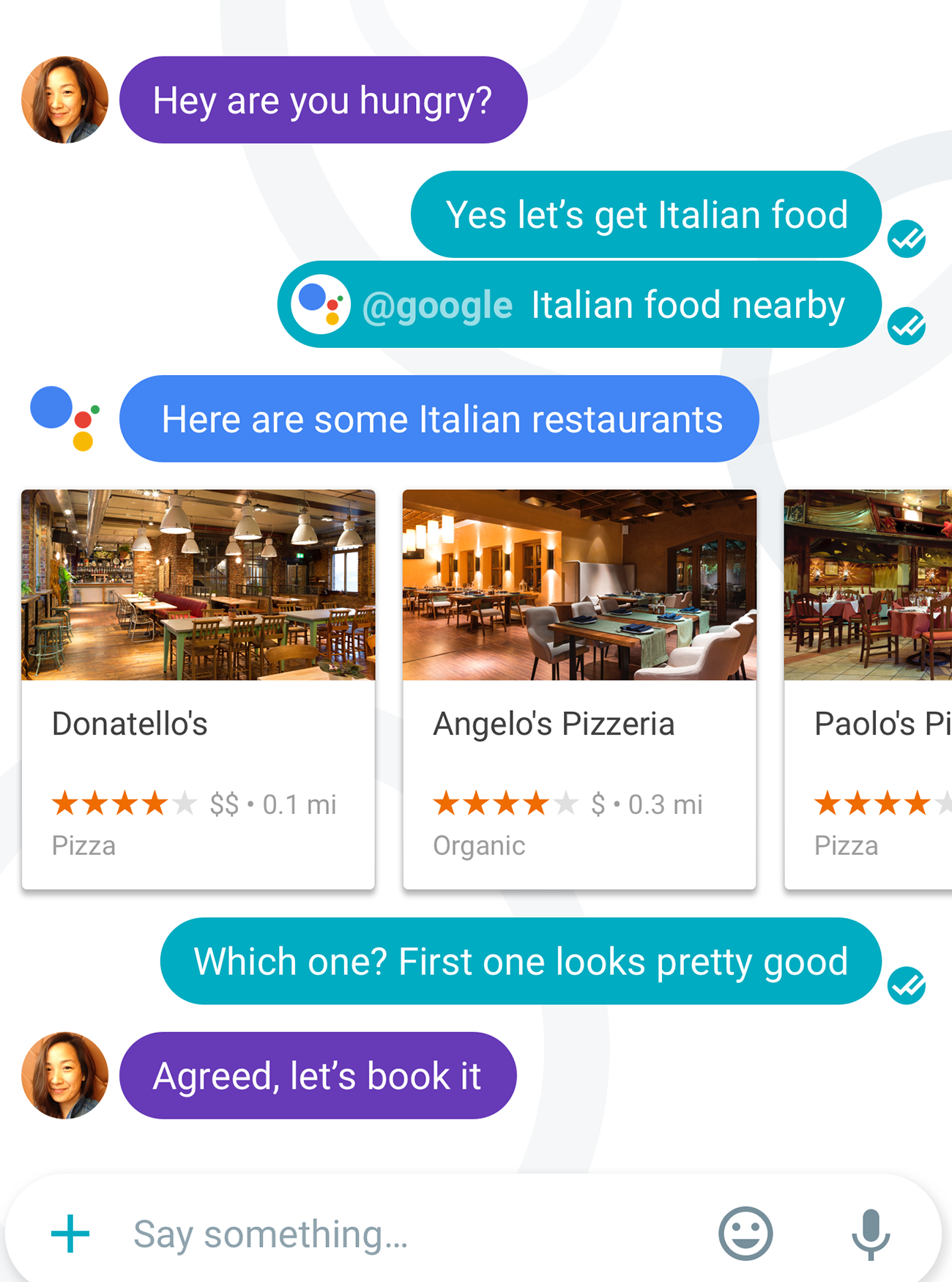 Google Assistant will be available in more Google products, like Google Home, “over the coming months.” The company envisions it “working seamlessly throughout your day at home or on the go.”

Google Assistant is neat, and it has huge potential. But it’s also easy to confuse it. You can have conversation loops that make absolutely no sense.

Sometimes it’s brilliant and can accurately discern what you’re trying to get at. Other times, it’s like the assistant is pressed for time and just replies with anything remotely related, which often results in a poor experience. To some extent, this is to be expected: Google Assistant is still in preview.

When it was first announced, and again at launch, many declared that Duo was Google’s answer to FaceTime. I can’t say I agree: FaceTime is limited to Apple’s platforms, iOS and OS X, which also means it works on mobile and desktop. Duo, at least at launch, is for Android and iOS, making it mobile-only. Fox told us that there are no plans to build a desktop app, though, of course, that could change.

As Google said last month, Allo and Duo are the company’s mobile-only messaging and video apps for consumers. Messenger for Android is all about carrier support, with Rich Communication Services (RCS), and Hangouts is being repositioned for enterprise and productivity and features desktop video conferencing.

These apps not only have to differentiate themselves from all the other messaging apps out there, they have to also compete with Google’s own offerings. If Duo’s main unique feature is Knock Knock, Allo’s is undoubtedly Google Assistant.

Allo is basically Google’s attempt to rebuild WhatsApp from the ground up. Allo was built from scratch, so it’s spiffier in some ways, but again, the main draw is the “smart” functionality that is supposed to improve over time.

But, frankly, I’m disappointed that Google created two apps. Fox told VentureBeat that there are plans to integrate the two more closely, but only in the sense that you can jump into a Duo video call from Allo. Put another way, the closest thing to making a call using Allo is being able to send a voice message. It’s a lot to ask users to download not just one, but two new messaging apps.

The logical way forward, assuming these new apps manage to gain decent traction, is to build Duo’s video calling feature into Allo, with Knock Knock, of course. Allo already lets you message through SMS with non-Allo Android users and even chat via app preview messages through notifications, so just add Messenger’s RCS functionality, and you’re good to go.

This sets the stage perfectly — assuming people are willing to use yet another messaging app — for a powerful messaging app for Android users and beyond. Allo should come bundled on all Android phones and be available for download on other platforms (iOS and whatever else Google deems worthy).

One app for consumers and one for enterprise. Not four.