First unveiled nearly four years ago, Google’s Project Fi service flits between the Wi-Fi and cellular networks of T-Mobile, Sprint, U.S. Cellular, and Three, ensuring that users have constant access to the best and fastest networks based on their current location. Subscribers pay $20 each month for unlimited calls and texts, plus an additional $10 for every gigabit of data they use.  Earlier this year, Project Fi also introduced a new unlimited mobile data plan for $60.

As part of its service, Project Fi already uses a virtual private network (VPN) to connect you to three 4G LTE networks and 2 million Wi-Fi hotspots, but moving forward the new enhanced network will bring this same VPN technology to all your connections, including Wi-Fi networks that aren’t part of Project Fi.

“When you enable our enhanced network, all of your mobile and Wi-Fi traffic will be encrypted and securely sent through our VPN on every network you connect to, so you’ll have the peace of mind of knowing that others can’t see your online activity,” the company said in a blog post. “That includes Google — our VPN is designed so that your traffic isn’t tied to your Google account or phone number.”

The new feature is available in beta from this week, and users can activate it from within the Project Fi mobile app. 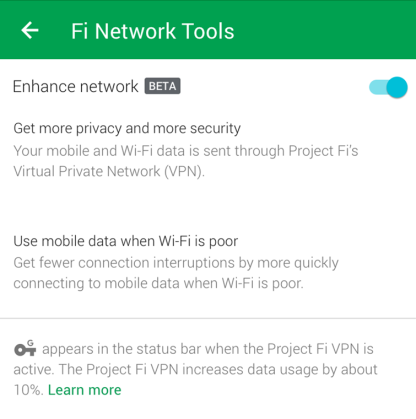 It’s not just about VPNs, however. Google said the enhanced network also enables your device to switch from Wi-Fi to cellular and back again, so you don’t have to experience those connection drop-offs that are typical when you are moving away from a Wi-Fi network and the signal is growing steadily weaker. Basically, when your Wi-Fi network is too weak to be of much use, Project Fi should kick the cellular connection into gear.

“Waiting to be reconnected becomes a thing of the past,” Google said. “In our testing, we’ve reduced the time without a working connection by up to 40 percent.”

At the time of writing, Project Fi is still only available on a handful of Android devices, including the recently launched Pixel 3, and you will need to be running Android Pie to enable the new enhanced network.