Google has launched a new transport navigation app specifically for New Delhi in India. Though Google Maps itself offers public transport and transit options in many cities around the world, Delhi Public Transport Offline represents Google’s first ever city-specific app for travelers. 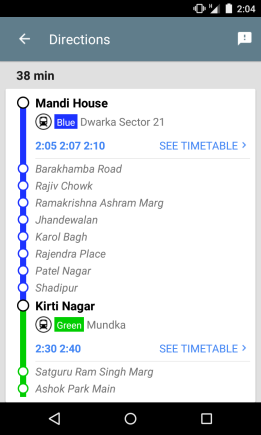 The Android-only app offers exactly what its name suggests: Directions and timetable data for buses and metros in New Delhi are available in offline mode, so if someone’s on a limited data plan or reception is poor, they can still get the information they need.

The app actually bears a striking resemblance to London-based Citymapper, a transport navigation app that’s popular in a number of cities worldwide. Using a device’s GPS signal, which doesn’t require Internet access, users can see in real-time where they are on their journey and where they need to disembark to catch a connection.

As with Citymapper, users can also save their favorite destinations for easy access in the future. Google’s Delhi app also offers transport news and delays, though this will require an active Internet connection.

The experimental app is essentially a Google Maps offshoot, designed by the same team, but it’s been built from scratch specifically for travelers and commuters in the Indian capital. Given that every city around the world has its own unique transport infrastructure, it’s not clear what Google’s plans are for introducing similar apps in other cities around the world, but there is a demand.

Indeed, although Google Maps does offer pretty good transport data in major conurbations such as London, specific use-case apps such as Citymapper have continued to flourish due to their design and focus on user experience.

It will be interesting to see what further plans Google has in this regard, though it’s worth noting here that the company regularly iterates on the transit options in the main Google Maps app, so it’s likely that the Delhi-focused incarnation is mainly about catering to a market that demands offline mode.