Google is getting back into the team collaboration space to take on Slack, Microsoft Teams, Workplace by Facebook, and Cisco Spark with a new service called Hangouts Chat. Available in a private beta, it blends private rooms for conversations and integrations not only with G Suite, but also third-party services. Hangouts Chat is a free service that comes as part of your G Suite subscription and is intended to help Google better appeal up-market at the enterprise.

Using Google Hangouts is often about videoconferencing, but it’s also about collaboration in many different forms. Over the past few years, the company has evolved its strategy to one centered around team productivity and chat. “[It took] a lot of figuring out what the right thing to do for enterprise users was,” remarked Scott Johnston, director of product management for Google Drive. “There’s a critical component of bringing teams together, but you have got to make the right decisions that both make them more productive, but also let them have their lives and let them jump into face-to-face meetings when they need to elevate it from a chat.” 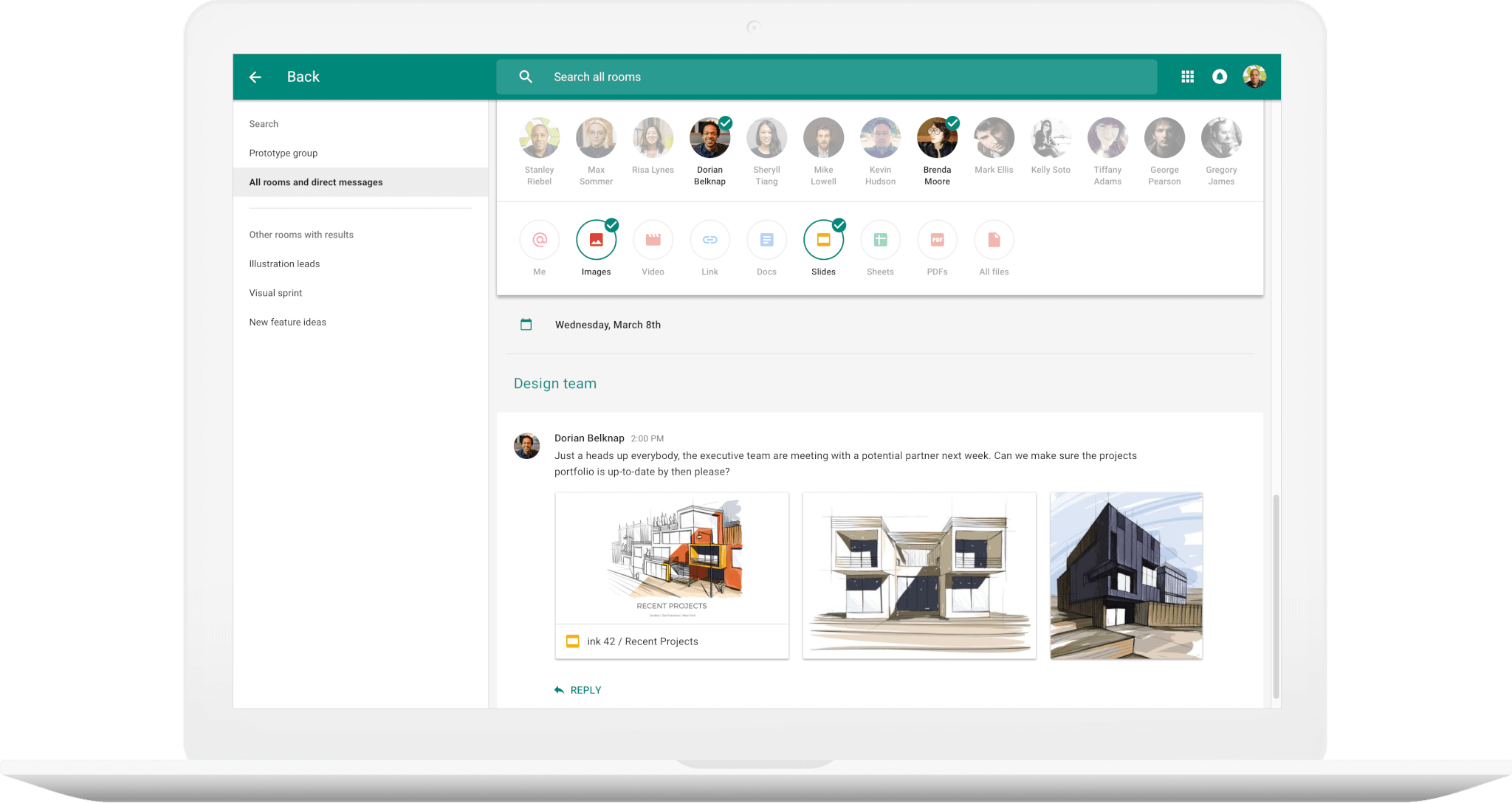 While we may use Hangouts as a place to converse, Google is following a route similar to Slack and establishing a platform to not only be a place to hold discussions, but to quickly jump into video calling when needed. Some of the available features include generating a simple, shareable web address that anyone can join without needing to download an app or plugin; providing a unique dial-in phone number for conference calls; supporting larger meeting sizes; having search that parses through all messages and rooms while filtering by individual or file type; featuring custom workflows; integrating with G Suite; and implementing data-loss prevention with administrative controls made for the enterprise. 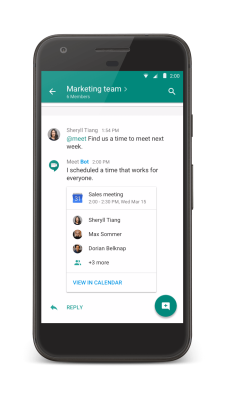 Google has also produced a bot called @meet designed to schedule meetings on your behalf, perhaps similar to X.ai or what LinkedIn recently launched. Having this automated program is worthwhile because it’ll be able to look at all internal calendars within a business’ G Suite account to find the ideal time for meetings and events, saving hours of needless back-and-forth to accommodate everyone. The @meet bot will be available for customers that sign up for the early adopter program version of G Suite.

This is just the first bot supported on Hangouts Chat. Google told VentureBeat that developers will be able to add their own once the service becomes generally available to the public. Google Assistant isn’t currently available within this offering. When asked why, the company replied: “It’s a good question. Let’s say we’re thinking really hard about it.”

What’s interesting is that Google is thinking about bots and automated programs right from the beginning instead of waiting. Whether developers flock to the platform or not remains a question, but being able to create a bot around the G Suite could be very appealing. 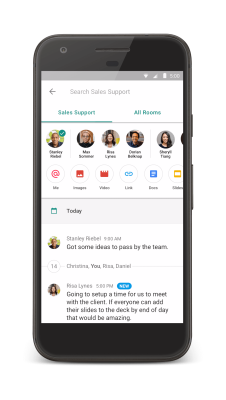 Google’s G Suite enterprise version launched in January and included all the usual refineries, including Gmail, Google Calendar, Google Docs/Sheets/Slides/Drive, Google Sites, Google Forms, and more — basically, all the core services any large business would need to operate. But one thing seemed to be missing, and that was a strong collaboration product a la Slack, Microsoft Teams, and others. The introduction of Hangouts Chat is intended to solve that problem by providing a full stack of resources for any company.

Hangouts Chat is a way to try to steer customers away from third-party services, since it’s an area where Google has been lacking until now. But this isn’t the first time the company has tried its hand at collaboration; it did have Google Wave in 2009 and its group sharing app Spaces, which will officially shut down on April 17, likely to make room for Hangouts Chat.

While Slack currently may have the upper hand in terms of integrations, Google could have the leverage in selling to the enterprise, an area Slack only recently officially targeted with its enterprise grid offering. But there doesn’t appear to be animosity between the two companies since Google does include a Drive integration with Slack.

Google’s initial support of bots along with video conferencing could also give it a stronger hand against other players including Facebook, Microsoft, and Cisco.

A Google spokesperson told us that the main value proposition of this new product centers around its “tight integration with G Suite and the introduction of the Hangouts platform, which allows for intelligence to be built in via bots and as well as third-party applications from other enterprise tools. Additionally, Hangouts Chat evolves the Hangouts experience in a way that can scale to enterprise-sized organizations. Rooms and Conversations make it possible for teams to work on entire projects in a productive way that keeps work moving forward, especially when teams can’t meet face-to-face.”

While Hangouts Chat will be initially available to current G Suite customers eligible for participation, once it becomes publicly available, anyone with a Google Account will be able to use it similar to how they use Hangouts today.