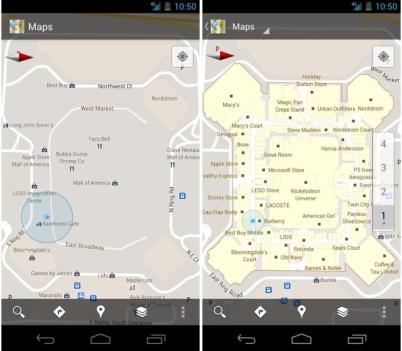 Google Maps for Android has just launched a new update  that tackles some of the toughest navigation challenges around: the interior world.

With Maps version 6.0, which arrived on Android devices today, users can now find the nearest bathrooms, ATMs and the locations of individual departments inside some of the largest retail stores, such as Ikea, Home Depot, and Macy’s locations nationwide.

“Today when most people go to an airport, or a shopping mall, or a large retail store, they try to hunt  down an information kiosk to figure out where they are, and find where they need to go,” Google Maps product manager Steve Lee told VentureBeat. “What we’re trying to do with Google Maps 6.0 is bring that information kiosk with you on your phone.” The new update gives accurate interior information within 5 or 10 meters (15 to 30 feet).

Getting the familiar blue dot to work properly indoors was one of the biggest hurdles, and the 3D environment of a store or transit station, with multiple floors,  added to the difficulty. “One of the big challenges indoors is that GPS is not always available, or is not as strong.” said Lee. This was overcome by getting detailed floor plans from Google’s partners, so that even on the fourth floor of a building the app still knows right where the user is. “Instead of a static ‘you are here,’  symbol on that information kiosk, the Google Maps blue dot will show you where you’re at inside any of these venues.”

Google has been making a very aggressive push lately to chart alternative spaces. In October Google Streetview added business interiors to its Maps product, and the in early November parks across the world  were also included.

iOS users will certainly be interested to see Maps 6.0 come to the iPhone and iPad, but Lee said there is no announcement for any other platforms at the moment. Since the iOS Maps application is made by Apple and still lacks plenty of features that Google has brought to Maps on Android, I wouldn’t hold my breath for these newer features.