Google is rolling out a “group planning” feature to Google Maps on Android and iOS from today.

The internet giant first announced group planning at its annual I/O developer conference in May, but it has taken nearly five months for the company to ready the new social feature for prime time.

Google Maps in its original guise was a simple app to help you find your way from A to B. But over the years, it has evolved into an extensive toolset that offers detailed information on places to eat, tourist attractions, business contact details, and more. As such, Google Maps has become a core component of people’s social lives, which is why the company is now embedding dedicated social features within the Google Maps app.

In a group setting, it can be hard to decide on which pub to go to or which restaurant to book for a big night out. But Google Maps will now let you create a shortlist of places by dragging and dropping candidate venues onto a little floating bubble at the side of the screen. This list can be shared with friends through any messaging app, and they can then vote for their preferred option — or throw other options into the mix. 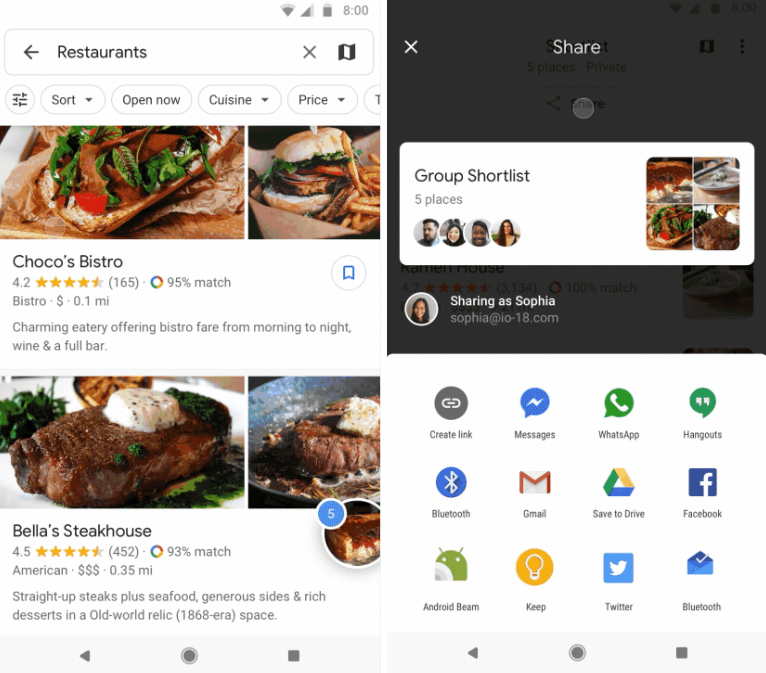 Interestingly, anyone in the group can also delete places added by someone else, so things could get a little feisty …

This latest expansion comes more than a year after Google added another notable social feature to Google Maps, when it rolled out a tool that lets you create lists of places and share them with friends — who can elect to “follow” all your favorite locations, such as pubs or parks.

Now, however, Google Maps has gotten just a little bit more collaborative and useful, which should go some way toward keeping people inside Google’s walled ecosystem and away from the many third-party social polling apps that are out there. Google actually acquired a popular polling service called Polar back in 2014, and the team was assigned to work on Google+. However, it’s unlikely that acquisition has any bearing on this latest feature rollout.

Group planning is officially landing in Google Maps for Android and iOS from today, though some reports from earlier this week suggested it had actually started rolling out earlier. At any rate, you’ll need to update to the latest version of Google Maps to use this new feature.