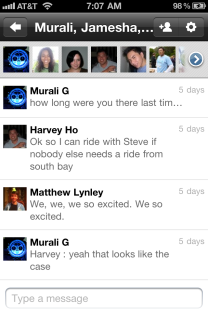 Google’s newest social network, Google+, features group chats for its mobile app (on Android and iOS) and in-browser video conferencing. They aren’t new ideas, but the execution for both is top-notch and they are useful for both businesses and typical consumers.

Here’s a breakdown of the new features and some cool things you can do with each:

Huddles are group chats that you can create to communicate with other Google+ users. It’s like GroupMe, a group-based text messaging service. I have a bit of a crush on GroupMe because it’s so simple, which is part of what makes a great messaging app. There isn’t anything in the way and it’s (relatively) straightforward to add and remove group members quickly.

Google’s way of doing group messaging is also a little crush-worthy because of its simplicity. To start a huddle, you select the Huddle part of the mobile app on an iPhone or Android device. The app then prompts you type in the name of the individuals you want to chat with. You then send out an initial message, and it’s off to the races. The messaging is pretty zippy, though in areas with spotty data coverage it can be pretty slow. For example, in areas north of San Francisco the messages can take around 5 minutes to find their way through the Internet.

Where the app falls short is when you’re adding a new member to a group chat that is already active. Google+ pulls information from your existing contacts, people in your Google+ circles and also your contacts in your phone when populating a list of people to add to the chat. There’s no way to quickly search for someone by typing in a name, so you have to page through (for some people) hundreds of contacts to find the right person. It’s kind of confusing, given that it prompts you to type names in when you start the chat, so the functionality is already built into the app.

The other downside is that you cannot communicate with people who aren’t on Google+. That shouldn’t be a problem for early adopters, because most — if not all — of your friends are likely already on Google+ and are carrying around the Android or iPhone app. But it won’t achieve the same kind of widespread appeal of GroupMe, which uses SMS and works on dumbphones and feature phones as well as any smartphone, if it remains closed to Google+. Adding a way to reply or chat via external e-mail would do wonders. 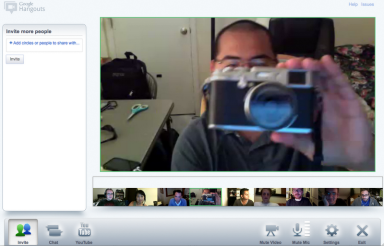 Hangouts are the equivalent of a telepresence video conferencing app — but without the several-thousand-dollar cost that most of those systems carry. It works really well in the field. You can video chat, or “hang out,” with up to ten people.

To start a Hangout, just click on the green button labeled “Start a hangout” in the right-hand column of the Google+ web page.

The video chat layout is similar to Cisco’s telepresence video conferencing setup. There is one large window that shows a video feed for whoever is speaking, and nine smaller feeds for the rest of the people on the call. Google+ detects when an individual is speaking and automatically places that person in the main video feed.

Hangouts are only available on web clients for the time being. It would probably make my brain explode if they added it to mobile devices because it is a pretty killer app for both consumer and enterprise needs. I regularly use Skype for video chats when reporting, but Hangouts seem like it would be an even more efficient way to conduct an interview. While I’m a big fan of Huddles, Hangouts are the killer app for Google+.

Be sure to check out the rest of our series covering Google+ and its new features, which will continue through this week.