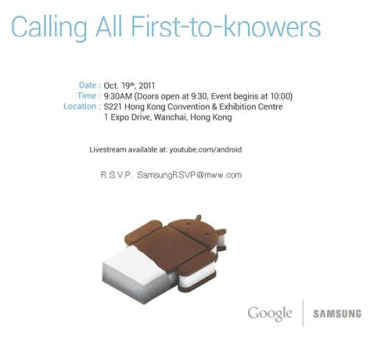 Google and Samsung announced they will hold their previously canceled mobile event in Hong Kong on October 18th.

The duo are expected to unveil Ice Cream Sandwich, Google’s latest iteration of its Android operating system, as well as the first smartphone that will run it, Samsung’s Nexus Prime. Last week, Google essentially confirmed the OS launch by creating a livestream placeholder for it on its “androiddevelopers” YouTube Channel.

Originally, the event was scheduled for October 11th at CTIA in San Diego. However, two days after the passing of Steve Jobs, the companies told VentureBeat “Under the current circumstances, both parties have agreed that this is not the appropriate time for the announcement of a new product.”

Even with the move, the companies haven’t shied away from creating some buzz around the event. In addition to the livestream placeholder on YouTube, Samsung released a promotional video of what could be the Nexus Prime, which declared, “Something big is coming.” Rumored specs for the phone were also floating around online, indicting a 4.65-inch display with curved glass, a 1.2-gigahertz dual core processor and LTE 4G connectivity through Verizon.

The event will take place in Hong Kong, and a livestream of it can be found at youtube.com/android.