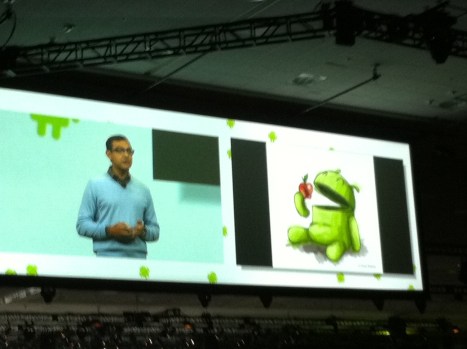 ﻿﻿Search giant Google, which dove into the mobile market just a few years ago, announced today that it has activated 100 million Android devices to date.

At its Google I/O conference in San Francisco, the company said the Android marketplace now sports more than 200,000 apps. Hugo Barra, director of product management, said Android users have downloaded more than 1 billion applications in the past month and have installed 4.5 billion apps to date.The company has gone head to head with Apple, which has more than 350,000 applications on its App Store and has led the charge in the smartphone and tablet races with the iPhone and iPad.

Google also announced Ice Cream Sandwich, the next version of its Android mobile operating system. It should come out in the fourth quarter this year. The top priority is to give app developers a development kit that runs on every device regardless of the fragmentation that has happened in the mobile operating system space. Google basically wants to eliminate differences between devices and create a homogenous operating system that works on any kind of form factor without custom applications or modifications. That’s been a major drawback of the operating system to date.

The company said it is rolling out the next version of Honeycomb, its mobile operating system that’s optimized for tablets. As previously demoed, Google revamped the task switching that creates a sidebar that users can browse through, similar to the slider at the bottom of the iPad and iPhone for multitasking. Android users can also stretch widgets on the main page, giving users a little more customization of their home screens.

Android devices can now act as USB hosts — meaning users can import photos and other content from cameras and other devices directly to the Android device. Android users can now also use other USB-enabled devices, such as game controllers and keyboards.