Google today announced two updates to mobile search results: an aesthetic one rolling out now and an algorithmic one coming next year. The former consists of removing the “mobile-friendly” label in search results and the latter will punish mobile sites that use interstitials. The goal is to “make finding content easier for users,” though as always, the company didn’t share exactly how much of an impact users and webmasters can expect.

In November 2014, Google started labeling sites as “mobile-friendly” to denote which pages are optimized for phones. In February 2015, Google announced plans to roll out mobile ranking changes in April 2015, and then in March 2016, it promised to start ranking “mobile-friendly” sites even higher in May.

Now that the ranking changes have been in place for months, and the team feels like it has made an impact, the label is no longer needed. Indeed, Google says 85 percent “of all pages in the mobile search results now meet this criteria and show the mobile-friendly label.” So the label is going away “to keep search results uncluttered.” Again, this is strictly an aesthetic change: The mobile-friendly criteria will continue to be a ranking signal.

If your site is in the 15 percent group, here’s a quick recap. A webpage is considered “mobile-friendly” if it meets the following criteria, as detected in real time by Googlebot:

But Google isn’t done just yet. The company wants to keep “improving” mobile sites by ranking them lower and higher in its search results based on its own criteria.

The company now wants to tackle “intrusive interstitials” as they “provide a poorer experience to users than other pages where content is immediately accessible.” After January 10, 2017, pages where content is not easily accessible (present on the page and even available for indexing by Google Search, but visually obscured by an interstitial) when coming from mobile search results “may not rank as highly.”

To be clear, Google isn’t planning to punish all types of interstitials. 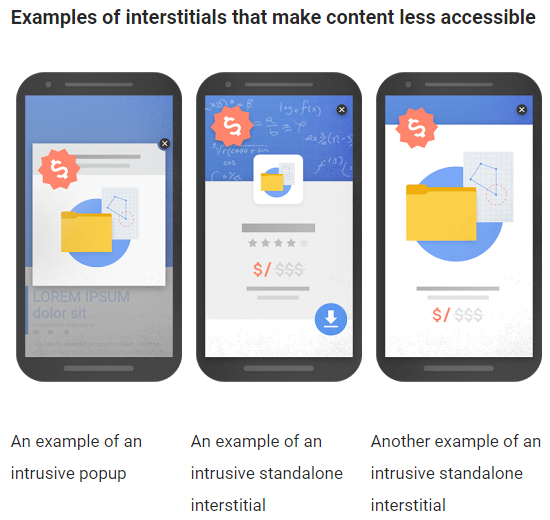 Interstitials that Google deems OK include legal obligations (cookie usage or for age verification), login dialogs on sites where content is not publicly indexable, and banners that use a reasonable amount of screen space and are easily dismissible. 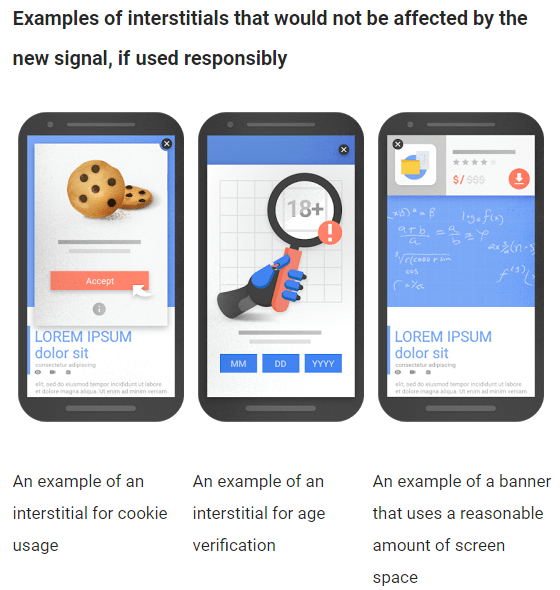 Google emphasizes that this new signal “is just one of hundreds of signals that are used in ranking.” But if you can avoid using shitty interstitials, you’ll help your users and your Google traffic.