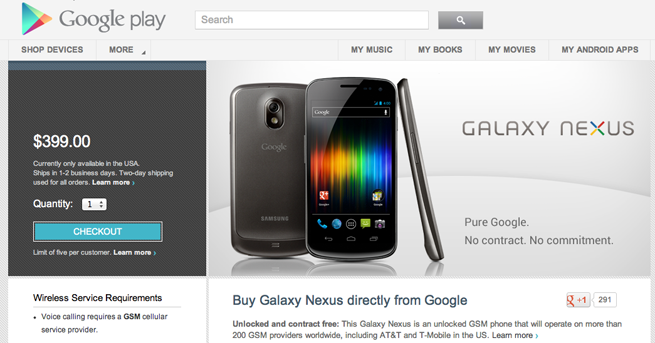 After Google’s failed attempt to sell the Nexus One smartphone a few years back, the search giant is attempting to sell hardware once more with an unlocked Galaxy Nexus compatible with HSPA+ networks, which is now available in the Google Play store.

Selling the Galaxy Nexus is a curious turn for Google following its trouble selling the Nexus One, but perhaps Google has learned lessons from that flop. Google likely wants to sell this device to give Android fans another option for buying one of the best Android phones on the market. Although most U.S. consumers opt for a 2-year contract and a subsidized smartphone, there’s still a segment that appreciates the ability to buy a phone for an upfront price and not be tied to a contract.

The $399 price tag, frankly, is unbeatable considering all the features and the fact that you don’t have to sign a 2-year contract. The phone is also available from Verizon and Sprint (which have CDMA networks) with a contract.