In the movie theaters, 2012 was the end of the world as we know it. For traditional offline clothing retailers, 2012 could be pretty much the same thing.

According to a new study by Google and Compete, 2012 marks a key switch: the first time that more than half of retail clothing purchases — almost 60 percent, actually — are either online or influenced by the web. That influence ranges from checking prices at competing stores to skimming product reviews to getting directions to the store … or even watching video previews online. 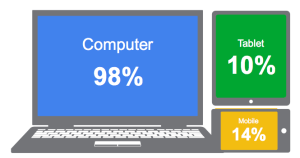 Above: Devices consumers daily check while shopping for clothing

Those shifts include shopping on tablets or smartphones: A startling 24 percent of clothing shoppers use mobile devices on a daily basis to research deals, prices, or product information. And 75 percent research clothing online after seeing an offline ad.

One of the most significant is that the most effective online marketing in terms of driving offline sales is video.

“Four out of ten shoppers who watched a product video online later visited the store online or in person,” Pollak says. “And 34 percent of clothing shoppers are likely to buy after watching an online video ad versus only 16 percent after watching an ad on TV.”

Those videos are not just product ads or company-produced infomercials; they include customer testimonials, reviews, and other user-generated content. 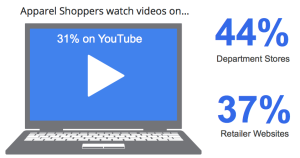 Above: Where consumers watch videos while shopping

Google’s study showed that shoppers who use video are heavier spenders than the average consumer: 25 percent buy clothing more than once a month, versus only 16 percent of non-video researchers. In addition, another 28 percent have spent more than $500 on clothing in the past half year. Only 2 percent of consumers who do not check online videos while shopping have spent that much.

Pollak attributes the power of online video to the nature of the web: shoppers can click away at any time. Staying and watching the ad indicates a level of interest that can’t be inferred from passively consuming a TV ad spot.

So what can offline retailers do?

A strong e-commerce website is table-stakes, as is a site that is easily accessible from a mobile device. Using video in product and sales presentations would to be a key factor, as well as enabling the creation or addition of user-generated video content to your website.

And adding online ads to offline campaigns wouldn’t hurt either. That’s not just a self-serving message from Google: It aligns with data that retail intelligence firm RapidBlue shared with me a couple of weeks ago.

Offline retailers who aren’t already using digital better hurry, however. They are rapidly approaching one of the biggest shopping seasons of the year: back to school. At $84 billion, back to school shopping ranks second only to  Christmas.

And if Google’s right, at least $42 billion of that spend will be influenced by what consumers see and do online.