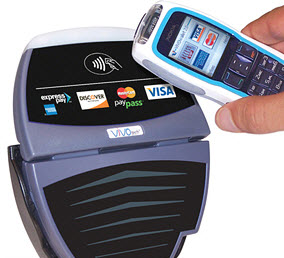 Making payments with your mobile phone is one of the great dreams of technophiles. Wave your phone in front of a reader and buy something just like that. To make that a reality, Google is teaming up with MasterCard and Citigroup to embed the technology in Android mobile phones, the Wall Street Journal reports.

The technology is known as “near field communication” and it has been used in Japan for some time. But it’s not easy to implement, since it requires standardized readers at merchants and wireless radio chips built into phones. Still, the companies are launching an effort to make it happen. If it works, the phone can become your electronic wallet.

The enticement for the merchants is that Google will be able to offer them more data about their customers and help them target ads and discount offers to the customers via their wireless devices, while they are inside stores and more likely to engage in an impulse purchase. Google is not asking for transaction fees, according to sources cited by the Journal.

The project will allow holders of Citigroup debit and credit cards to pay for purchases by activating a mobile payment app for the existing Nexus S smartphone as well as future models of Android phones. Besides getting targeted offers, users could also manage their credit card accounts and track spending via a smartphone app.

Another participant is VeriFone Systems, which makes credit-card readers for cash registers. VeriFone will roll out more “contact-less readers,” or those that can enable consumers to pay by waving a phone over them. That establishes a short-range, or near field, wireless connection. Some thousands of merchants have the readers in place across the country, but near-field communications is still in its infancy in terms of users.

Google’s latest Android mobile operating system supports this technology. The system is expected to be released this year. Eric Schmidt, chief executive of Google, showed off a trial NFC phone (the Nexus S) last fall. But the effort has been a long time coming because it requires so coordination among a lot of players in the payment and mobile phone ecosystems.

Verizon Wireless, AT&T, and T-Mobile also said last fall that they would team up on a mobile payment system — dubbed Isis — for smartphones. Discover Financial Services said it will process those payments. Apple is also rumored to be toying with the technology, but it is worried about the absence of standards in the market.

The market for mobile payments is expected to grow to $618 billion by 2016, according to a report by consulting firm Edgar, Dunn & Co. That report is sponsored by MasterCard.