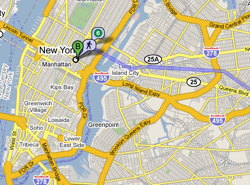 Google Transit is now serving the entire New York metro region. This means the subway, the buses, the rails, the ferry service schedules and even walking directions can now all be easily accessed from the web. Using the Google Transit site (or its corresponding service built in to Google Maps), users can plan trips without the use of a car.

As Google puts it, “Transit is a vital part of the infrastructure that makes cities run efficiently, and can help mitigate congestion, environmental concerns, and increasing energy costs.”

While planning trips in advance is nice, using Google Transit on the go could be the real killer feature. Newer smart phones like Apple’s iPhone and today’s recently unveiled T-Mobile G1, can certainly access this data from their full-fledged web browsers, but Google has also made a mobile version built for older BlackBerrys, Windows Mobile devices, Symbian Series 60 devices and other Java-based phones, according to the Google Mobile Blog.

Google Transit now operates in over 170 cities all over the world. See more in the video below.