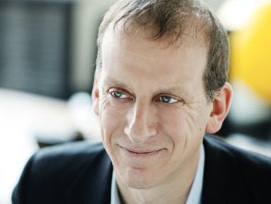 Google Ventures announced Tuesday that it is investing in Astrid, a task management app, and Crittercism, an SDK that helps provide customer support for mobile.

Google Ventures’ partner Rich Miner made the announcement during VentureBeat’s fourth annual MobileBeat conference. (We have a separate story with more details on the Astrid investment.) We’ll be posting more on those companies throughout the day.

After the announcement, Miner answered the question on everyone’s mind: Where’s the Android fund? Kleiner Perkins has its Apple-focused iFund, but neither Google nor venture firms have anything similar for Android startups.

“I think the time has gone by,” said Miner. “It’s now all about mobile.”

The proof is in the pudding, er, funding: Astrid and Crittercism are both mobile companies.

Miner has a front seat to watch mobile phone market growth. He became a partner of Google Ventures after Android, the mobile platforms company he co-founded, was acquired six years ago. He has over 25 years of experience growing businesses with innovative communications and interface-intensive applications. During his early years at Google, he helped lead the development of the Android platform and ecosystem. Prior to Android, Rich was a Vice President at Orange, where he led R&D activities in North America and was an original principal at Orange Ventures when it was founded.

Miner recalled his early days at Google six years ago, when Android was “treated as a separate startup.” The company was self-funded when Google picked it up.

“It was Larry [Page, Google co-founder] who latched on first. He was our champion. He shared our strategic view,” said Miner. He says he was impressed that Page, his co-founder Sergey Brin and then-CEO-now-chairman Eric Schmidt understood the mobile industry. It was important for Android to have support and flexibility right from the start, and those ingredients are necessary today.

“There were skeptics about Android all the way through last year,” said Miner. “There has been a tipping point.”

That tipping point happened in the last six months, he explains. As a VC, Miner’s goal has always been to make money, and Apple’s App Store makes money. Up until last year he was recommending companies focus on iOS. Now, he says, Android is “on a rocket ship.”

Another hot topic: Where is Google going with Chrome?

Miner believes the line between Android and Chrome has been drawn: Android is for mobile, while Chrome is for desktop and laptop environments. The theme is that Google understands the open platform. Miner also believes native apps and HTML 5 both have their place. Android, however, supports both for the times you want or need to go offline.