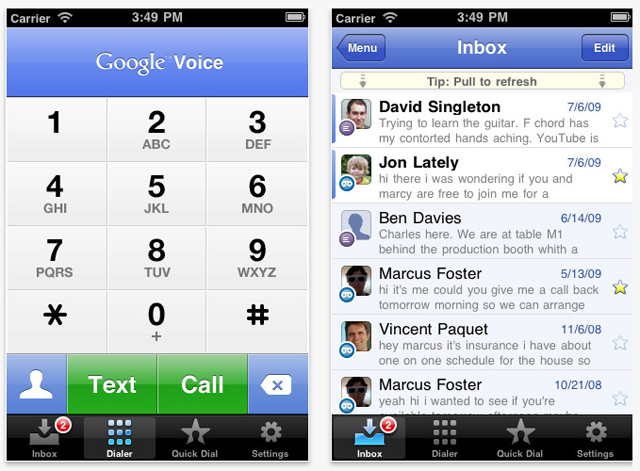 Google has released a feature-rich update to its popular Google Voice app for iOS, but unfortunately it also comes with numerous bugs.

The application catches-up the iOS app to where the Google Voice Android app was a month ago. The iOS app adds welcome features like group texting, multi-line text entry, one-touch copy and paste in the dialer and integration with Sprint phones. The Sprint integration is especially good because it lets the company’s new iPhone owners send calls to the native dialer.

But as great as those features are, the app has a few serious issues that need fixing. The biggest single issue being complained about is that when you call someone through Google Voice, it now shows your phone’s number on other people’s Caller ID rather than your GV number, as it previously did. I can confirm that this issue is legit, as I saw it in my own testing. Other issues reviewers have include the following: Sprint users no longer being able to make U.S. calls, one user said he could no longer make international calls, another said voice dictation no longer works and a few users said the app no longer works because they cannot log in.

Google was forced to pull its Gmail for iOS application in early November because of crippling bugs, and later released a working version of the app in mid-November. Coupled with these new Google Voice errors, this makes us wonder if the mobile app team has been shaken up lately. In the past, updates weren’t so consistently buggy.

At this point, I would highly recommend not updating your Google Voice application for iOS until these issues are resolved.

Update: A Google spokesperson has sent us the following (predictable) statement:

We’re investigating reports of bugs for some users on the latest Google Voice iOS app launched today. We believe we isolated the issue and are working on getting a fix for it shortly.