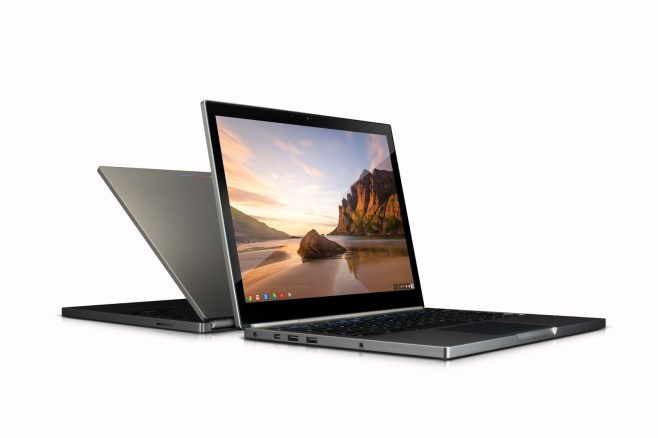 No, it’s not an early April Fool’s joke. Google just announced the Chromebook Pixel, a high-end Chrome OS-powered laptop that starts at a whopping $1,299.

The Chromebook Pixel is no hardware slouch, but though it’s priced similarly to the MacBook Air and high-end PCs, it can only run web applications. Chrome OS is basically Google’s attempt to build an entire operating system out of its Chrome web browser.

The Pixel sports a 12.85-inch touchscreen, a sharp 2,560 by 1,700 resolution, 4GB of RAM, and it also comes with 32GB and 64GB SSD storage options. The Pixel’s screen harkens back to laptops of yore, with its 3:2 ratio display, which is taller than the more popular widescreen displays. It’s powered by a dual-core 1.8-gigahertz Core i5 processor, and it also comes with 1 terabyte of free cloud storage. There’s also an LTE-equipped model for $1,449.

Just like Google’s ill-fated Nexus Q, the Chromebook Pixel seems to be a beautiful piece of hardware built with nobody in mind. I can’t imagine any consumer would prefer an expensive laptop with limited capabilities over a shiny new MacBook Air, or buying a cheaper Windows 8 Ultrabook and having money left over for a tablet. There’s no value proposition with the Chromebook Pixel; it’s just a severely limited machine with a baffling price.

So far, Google and its hardware partners have focused on low-end Chrome OS laptops. Acer’s most recent model starts at $199, and Samsung’s starts at $249. HP’s recently announced Chromebook starts at $330, a price I called ridiculous at the time. I probably would have gone easier on HP’s model had I known that Google was seriously working on a crazy expensive Chromebook.

Design-wise, the Chromebook Pixel clearly seems inspired by the MacBook Air and similar Ultrabooks. Its metal case seems simple and attractive, though I’m only judging based on pictures. The Pixel is only .64-inches thick and weighs 3.3 pounds.

But beauty isn’t enough to overcome the fact that the Pixel is just too crazy for anyone but rich eccentrics. It’s nice to see that a high-end Chromebook is possible, but Google hasn’t given us any reason to justify why it needs to be this expensive.