Introduced chaotically alongside Pixel 3 phones, Pixel Slate tablets, and Pixel Stand accessories, Google’s $149 Home Hub seemed somewhat out of place at its October launch event. Odd name aside, the latest Google “smart display” — a tablet designed to be left in one place — arrived months after similar options from JBL and Lenovo, but included a smaller, 7-inch screen and lacked a front-facing camera.

My colleague Khari Johnson quickly nailed Home Hub’s biggest pros and cons in separate articles, seeing it as an Amazon Echo Show and Facebook Portal challenger on price, but concluding in a subsequent review that it was a somewhat perplexing alternative to the aforementioned JBL and Lenovo smart displays on features. At a time when rivals offered bigger screens, better sound, and video calling, what was Google’s angle?

After spending some time with the Home Hub, I’m convinced that Google knew exactly what it was doing when it designed this device — the challenge was in explaining and marketing it. Faced with questions regarding “missing” cameras, Google representatives said they were deliberately omitted to make users comfortable using Home Hub on bedroom nightstands. Some people didn’t buy that explanation, and thought Google was trying to save a few bucks on camera parts, but it makes complete sense to me.

From where I stand, Home Hub is Google’s answer to Amazon’s Alexa-equipped Echo Spot clock, and substantially intended to displace tablets (such as iPads) from their places in bedrooms and other traditional places for clocks. Viewed more broadly, it’s Google’s way of giving its numerous paid and free services a permanent spot where you sleep or work, without following Amazon’s Fire Tablets straight to the bottom of the consumer electronics price range. 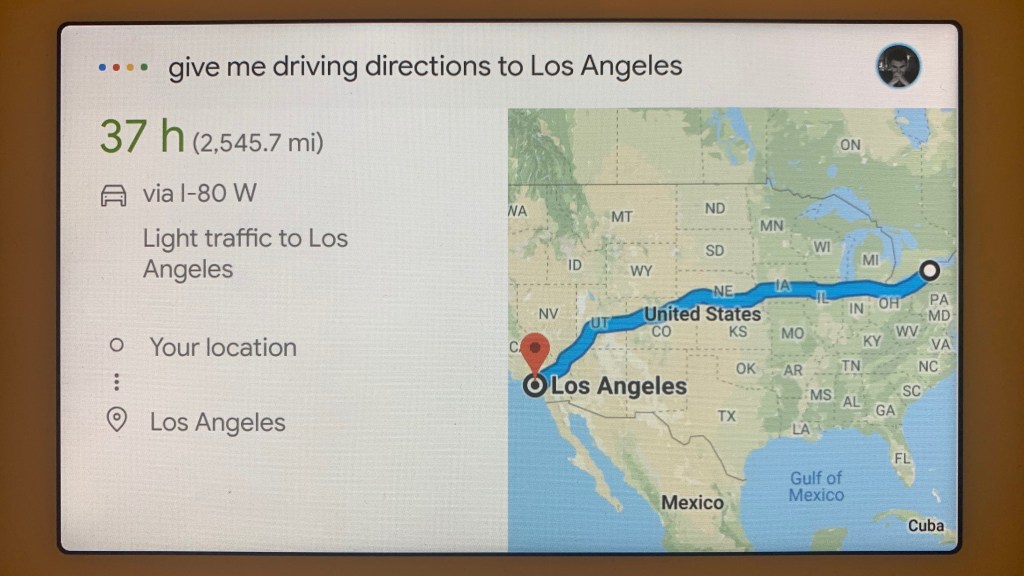 Ever since the 2012 release of the iPad mini, Apple has all but completely ignored calls to lower iPad prices below the 7.9-inch tablet’s $329 MSRP: It has offered small educational discounts to bring certain iPads down to $299, but never allowed its tablets to fall to the $199 or sub-$99 price points favored by competitors. Today, the least expensive (and several-year-old) iPad mini inexplicably sells for $399, and the latest models are the priciest Apple has ever released.

So it’s perhaps no surprise that iPad sales have stagnated, and the shine is off one of Apple’s most promising pillars of growth. That partially explains why the company is no longer going to disclose iPad unit sales every quarter, instead focusing on the total revenues it generates — a number it’s trying to goose with this year’s even more expensive iPad Pro models. 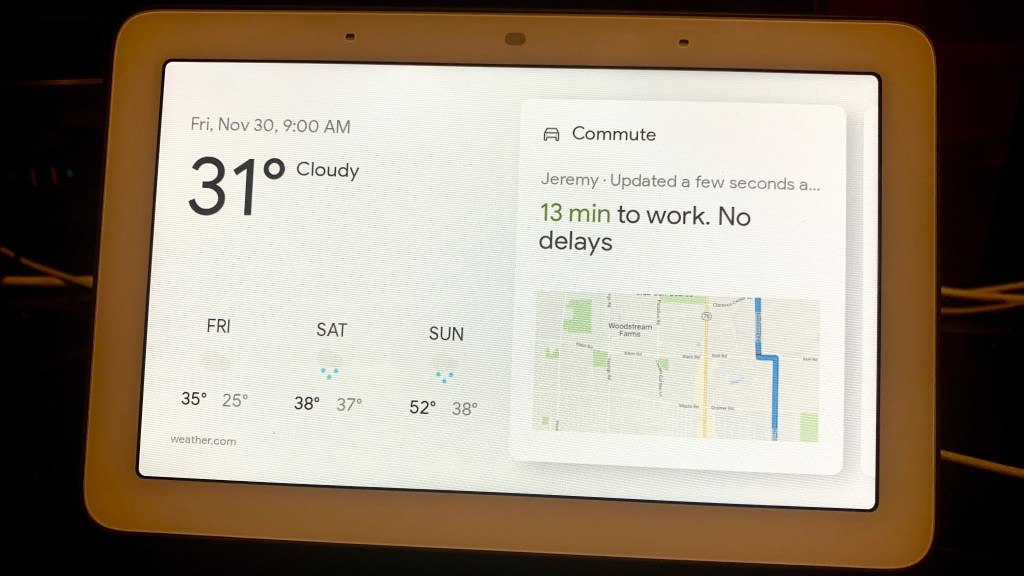 Apple’s prices have created an umbrella for competitors such as Amazon to utterly dominate the small tablet market with multiple options in the $50 to $150 price range. Amazon has pitched Fire Tablets as ideal for Kindle book reading, video consumption, and mobile game playing, focusing heavily (though not exclusively) on kids. Now Google is using Home Hub as a convenient way for adults to access its numerous services.

Most of the time, Home Hub will sit in one place — your nightstand or your desk — and look like an alarm clock, a picture frame, or a combination of those two concepts. In pure alarm clock mode, you can choose between purely digital or hybrid digital and analog faces, including options optimized for dim or bright rooms. 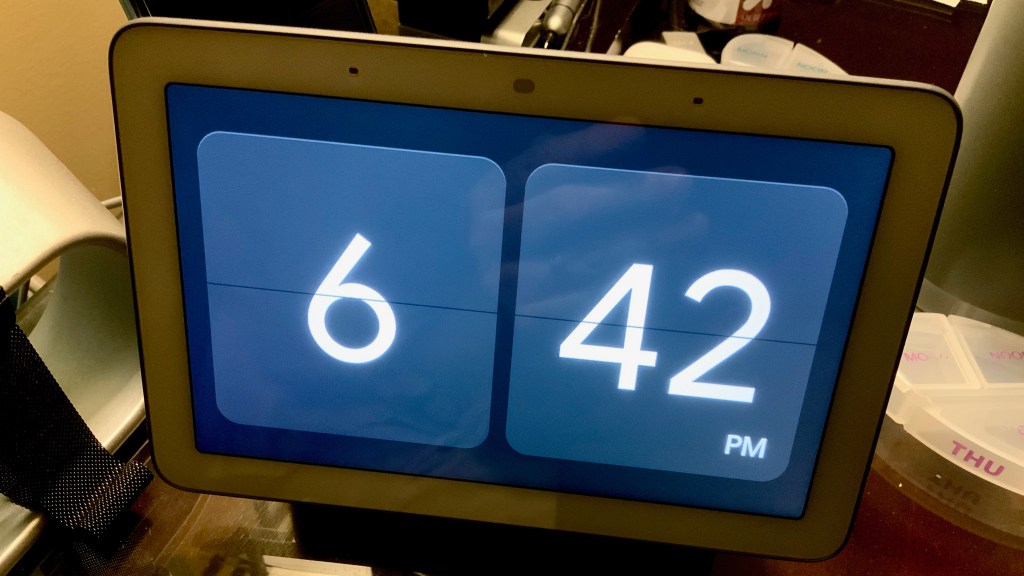 Google clearly spent a lot of time working on making its clock and screen software suitable for bedtime use and varied lighting conditions. Thanks to a well-calibrated ambient light sensor, Home Hub automatically adjusts the screen’s color and brightness to perfectly suit room conditions. Moreover, it has an entirely separate clock face that it falls back upon at night, with numbers that dim perfectly to match the perceived brightness and color of the front frame. I’ve been impressed by the thoughtfulness and quality of Google’s clock engineering labors. 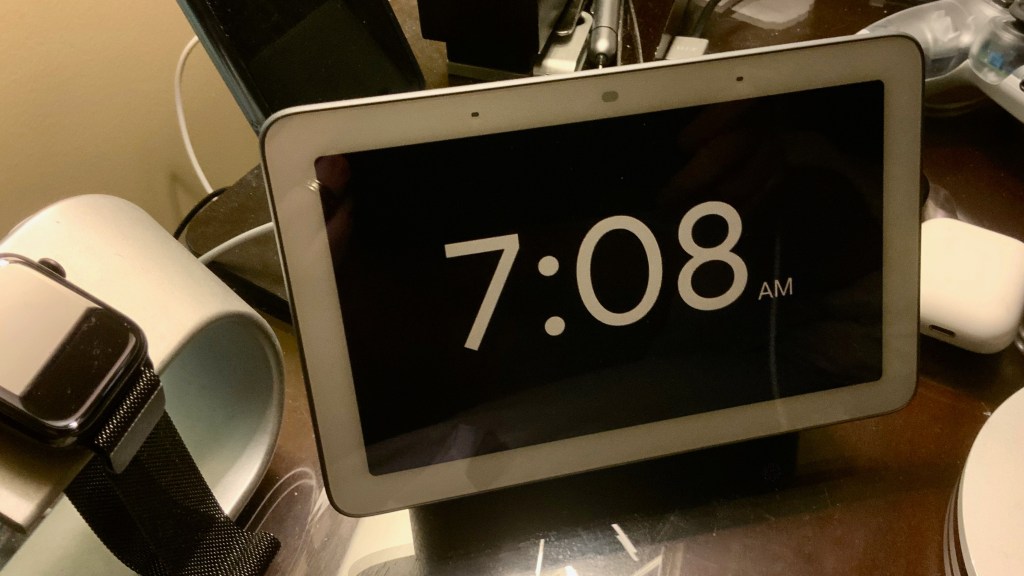 Say what you will about the physical size of the 7-inch screen — it’s a clear winner over the much smaller Echo Spot for the price, and backed by great software and services. Used as a photo frame, Home Hub can pull images automatically from Google Photos, a collection of Google and Getty images, Facebook albums, or Flickr galleries, and the pictures consistently look great.

It’s worth noting that Apple shipped the original iPad with a comparatively limited photo frame option, but pulled the feature years later from iOS. The likely reason was that iPad users weren’t just setting their $499 tablets down in one place and leaving them there to display photos. But being reliably available where you left it is a large part of Home Hub’s appeal. 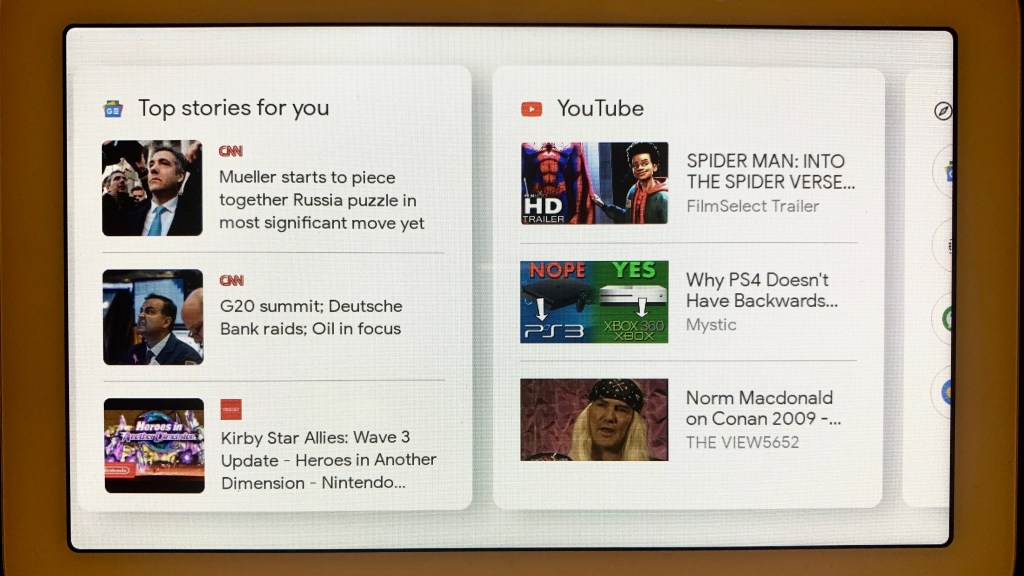 The other part is that it is optimized to handle the sorts of things you might want from a bedside or desk assistant, and the ways you would interact with such a device. Everything can be controlled by saying “Hey Google” to evoke the extremely capable Google Assistant. But if you prefer to touch and swipe, you don’t have to fiddle with small touch targets on the screen you can miss with an errant gesture, unlike iPads. Home Hub displays options in card-like panes, and automatically surfaces interesting and commonly desired features in fairly large buttons.

You can also enjoy many of the same entertainment features found on Alexa-equipped Echo devices, albeit with Google’s services. YouTube’s there, as is YouTube Music, plus links to Google News, Reuters video news summaries, and even a collection of jokes. Google’s own content is pretty much PG-rated by default, and parental settings let adults lock down explicit music and kid-unfriendly YouTube videos, as well. 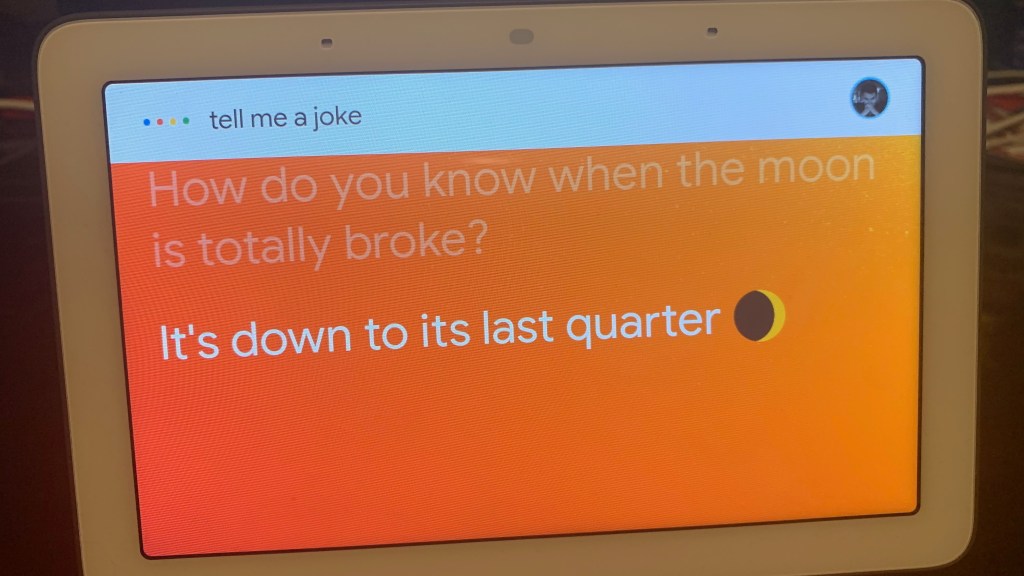 During last year’s holiday season, I explained that Amazon had figured out the way to bring Alexa into this Apple-focused user’s life with the Echo Spot. Particularly at its $99 Black Friday pricing, Google’s Home Hub has the potential to do the same for Google Assistant.

Up until now, I didn’t think I had a need for yet another AI-equipped device in my home, and I certainly didn’t need another “smart speaker.” But with the right price, a great screen, and interesting features, Google has found a way to bring its services into more rooms of my house. I suspect it will succeed with many other people, as well.