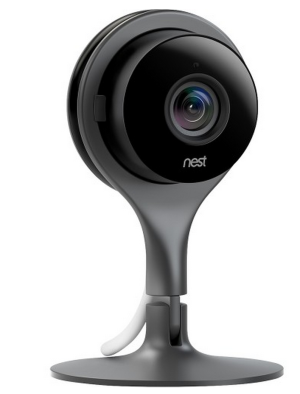 The camera has a built-in microphone and speaker, so not only is the device always listening (and reporting sounds to the app), but you can use it to tell the dog to get the hell off the couch.

The microphone can ignore background noise, Nest said, like the sound of traffic, but will send an alert if it hears something potentially dangerous like a boom, a crash, or a strange voice.

In the Nest app’s home screen you can see what each camera is seeing in the home. You can click on any one of them for a larger view.

The Nest app got a redesign to accommodate the new camera and to better display thermometer and smoke detector information. The app runs on iOS 8 or Android 4.0 mobile devices.

A Nest representative said that uploading video streams to the cloud requires roughly a half a megabit per second of bandwidth. The average available bandwidth in the home is around 11 megabits per second, the person said. So if several cameras are streaming constantly to the cloud, it can take a significant bite out of the total bandwidth availability in the home at any one time.

The alternative to streaming is simply checking in on the various cameras around the home using the app.

The camera is powered by a 10-foot USB cable that plugs into a wall outlet. It has a magnetized metal base so that it can stand upright or be mounted to a wall.

An FCC filing tipped Nest’s hand earlier this month. The company’s testing lab in Taiwan submitted its test report on a Nest “wireless camera” to the FCC for approval in early March. The documents became public record in late May.