Google today announced that Project Fi is getting a Group Repay option to help users split their group plan bill. Each month, the service will calculate participating members’ portion of the bill, send out payment reminders, and let members repay plan owners directly through Project Fi. The goal is to remove the awkwardness of reminding others to pay you back and figuring out how much each person owes.

Project Fi is a mobile virtual network operator (MVNO) launched by Google in April 2015 with plans starting at $20 per month (data costs an additional $10 per GB per month). This means the service relies not on Google’s own mobile network, but on existing networks provided by carriers (Sprint, T-Mobile, and U.S. Cellular), as well as Wi-Fi connections when they’re available. The catch is that Fi requires using a Nexus 6P, Nexus 5X, Nexus 6, Pixel, or Pixel XL, as these are the only phones the service supports for performing the handoffs between connections. Google debuted the Project Fi group plan in October 2016, allowing up to six people on one plan and letting owners invite new members at any time for $15 per month.

Group Repay allows group plan owners to choose how exactly to split the bill: individual total, fixed amount, or additional data only. Once you’ve selected, Project Fi will do the math and take care of the rest. 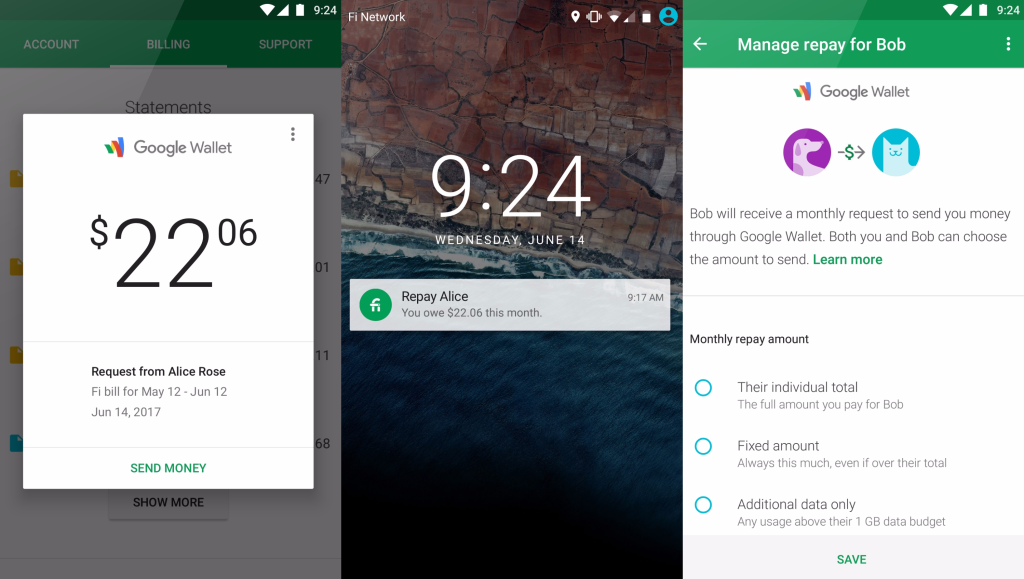 Plan owners or members can set up monthly repayments and reminders. Integration with Google Wallet means plan members can simply tap the notification and hit “Send Money” to complete the request. Plan owners can even cash out repayments automatically to a debit card or checking account.

Last but not least, group replay also keeps track of your Project Fi payment history and lets you view your payment statuses for the current month. If you’re already on a Project Fi group plan, group repay is in settings under the billing section of your account (Google is promoting the new feature by offering a free month of service to Project Fi plan owners and whomever they add to their group plan).

According to Google, its group plans efforts are likely to be appreciated by many, since group mobile phone plans are more popular than ever. Citing a May 2017 Google Consumer Survey of 500 respondents in the U.S., the company found more than 75 percent of adults share their wireless plans with at least one other person and that of these, 1 in 5 agree to split the bill.

Project Fi is still a niche service, though. It’s difficult enough signing up a “group” together and making sure everyone is willing to have the same wireless company. While making it easier to pay as a group is certainly welcome, Project Fi still only works with a handful of phones, and that’s where Google should be focusing its efforts.