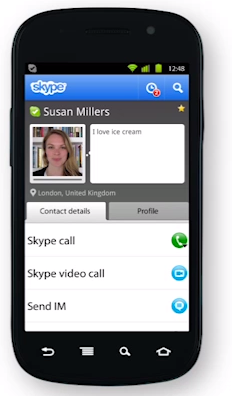 Skype video calling is now providing most Android users with video chat. This has been a long time coming. Skype’s Android App was originally released in October 2010.

Skype for Android 2.0 works over Wi-Fi and 3G and is currently only offered on four phones that run on Android 2.3: HTC Desire S, Sony Ericsson Xperia Neo, Sony Ericsson Xperia Pro and Google Nexus S. More phones should be added to that list in the near future. A single application working across multiple devices would help make video calling on mobile devices more popular, especially devices with front and back cameras (making it easier to connect via video).

Video chat isn’t new for the Android (services like Fring allow Androids to connect with other smartphones, and Google video chat is available for Android versions 2.3 and higher), but the phone to computer component offered by Skype for Android is a new and welcome feature.

The service provides free 1-to-1 video calls to other Skype contacts on the iPhone, Mac, Windows PCs and even TVs3. Users can also make calls to landlines and send SMSs.

Skype for Android comes with a new user interface, including a new “mood message box” at the top of the Skype app menu for users to share what they’re up to or how they’re feeling. Testers at Engadget.com are feeling pretty good about the service, writing that “though we did only test it over WiFi, 3G performance may be materially worse.”

Skype for Android with video can be downloaded for free from the Android Market or Skype.com/m using any phone browser.