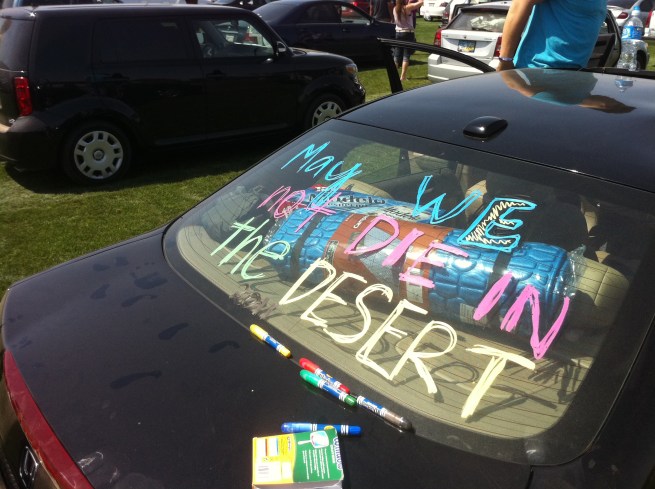 There’s simple elegance in a text message: Maybe you send an emoticon or an “I love you,” but more often than not it’s just a quick update. It’s like a Tweet, except more ubiquitous. You can’t count on people reading Twitter. With text, you most always can.

That’s why text messaging will never die. It’s short and elegant, and you can send a text to anyone. That’s a lesson I learned this weekend while stranded in the middle of the desert with just a few more than a dozen of my closest friends. Each of us had different phones — dumbphones, smartphones, iPhones and Android phones — and desperately needed a way to keep in touch throughout the Coachella Music and Arts festival.

Enter GroupMe, a group-texting service that creates a virtual chat room around text messages. GroupMe creates a phone number that anyone can hit with a text message, and usable by anyone who signs up to the group. The text is then delivered to anyone signed up for the group. You can make as many groups as you want, and you limit the groups by inviting only those you want to join. It works for conference calls as well — anyone can dial into the number and start a group chat. The best part: It doesn’t use data networks at all, which are crushed during any festival like Coachella.

GroupMe is built on top of a service provided by Twilio, a San Francisco-based startup that provides easy access to voice and text-messaging services which might otherwise be out of reach to small companies. The first version of GroupMe was built over a weekend last May during a hackathon, a type of programming contest which challenges developers to swiftly create a working Web service. It started getting a lot of buzz at the South by Southwest festival in March.

And GroupMe became the lifeline for those of us travelling around the Coachella fair grounds this past weekend. I checked out every single show I possibly could at the concert, but it was always ten times as fun to experience it with another person. Most of the shows are emotionally charged — especially if you or your friends have some sort of appreciation for the bands playing. It’s almost always better to have someone else to share the experience with.

Between shows I’d find myself frantically checking texts that passed through our GroupMe group. I’d brag about the amazing energy Mumford and Sons had on stage. Jealousy crept in when I saw a messages saying The Killers took the stage to play a few songs with Brandon Flowers. After a gig, I’d tune into find out what our group’s next step was: Were we were headed back to camp to relax for a bit, or sprinting to the next performance by Chase and Status on the other side of the venue? (Seriously, I’m pretty sure I lost around 8 pounds after all that running and dancing.)

As I’m writing this, I’m gazing over at a glowing beach ball I snagged from Arcade Fire’s performance. It glows whenever you make any kind of sound near it. Hundreds of these balls rained down from on top of the concert venue during the band’s presentation of “Wake Up.” It’s such a simple little toy, yet it evoked so much energy and joy in the crowd and made all of us feel like kids again. Sometimes, it’s the simplest little things that end up working best.

There are tons of new apps that are trying to replace text messaging. Apps like Kik and Highnote offer a few extra bells and whistles for text messages — like being able to see when other users receive the message or sending other kinds of media. But everyone has to download those applications to use all the extra features. I mean, I only use Kik to keep in touch with my editor-in-chief Matt Marshall — who’s basically sold on the service because he says it is so fast. But these other apps rely on data networks too, which are strained to the point of being useless at events like Coachella.

I feel like some of these apps are experiencing the same road block that mobile payments face today. There are a huge number of companies trying to turn cell phones into a way to make payments. Some companies want to do it with near-field communication radios built into phones or through using text messages to make payments. But everyone already has credit cards, and they’re simple enough to use — why replace them?  There’s always a chance credit cards will be replaced someday (and there are plenty of reasons why), but it’s just not easy enough to do in the short term.

Almost everyone — right now, not tomorrow — can receive text messages and send them out. Start-ups like GroupMe are constantly showing us that there are ways to make text messaging even more useful. All it takes is a little bit of thinking outside the box, and GroupMe’s $10.5 million in cash doesn’t hurt either. Why fix it if it isn’t broken?