I can independently confirm that an augmented-reality smartphone is really cool.

While holding the new Lenovo Phab2 Pro in my hand, I placed a virtual stool on a real table a foot or two in front of me, got up close and stepped back and looked at it from a few different angles. And that’s when I realized that Google’s underlying Tango AR system adds a whole new dimension to mobile devices. It’s funky; it’s surprising. 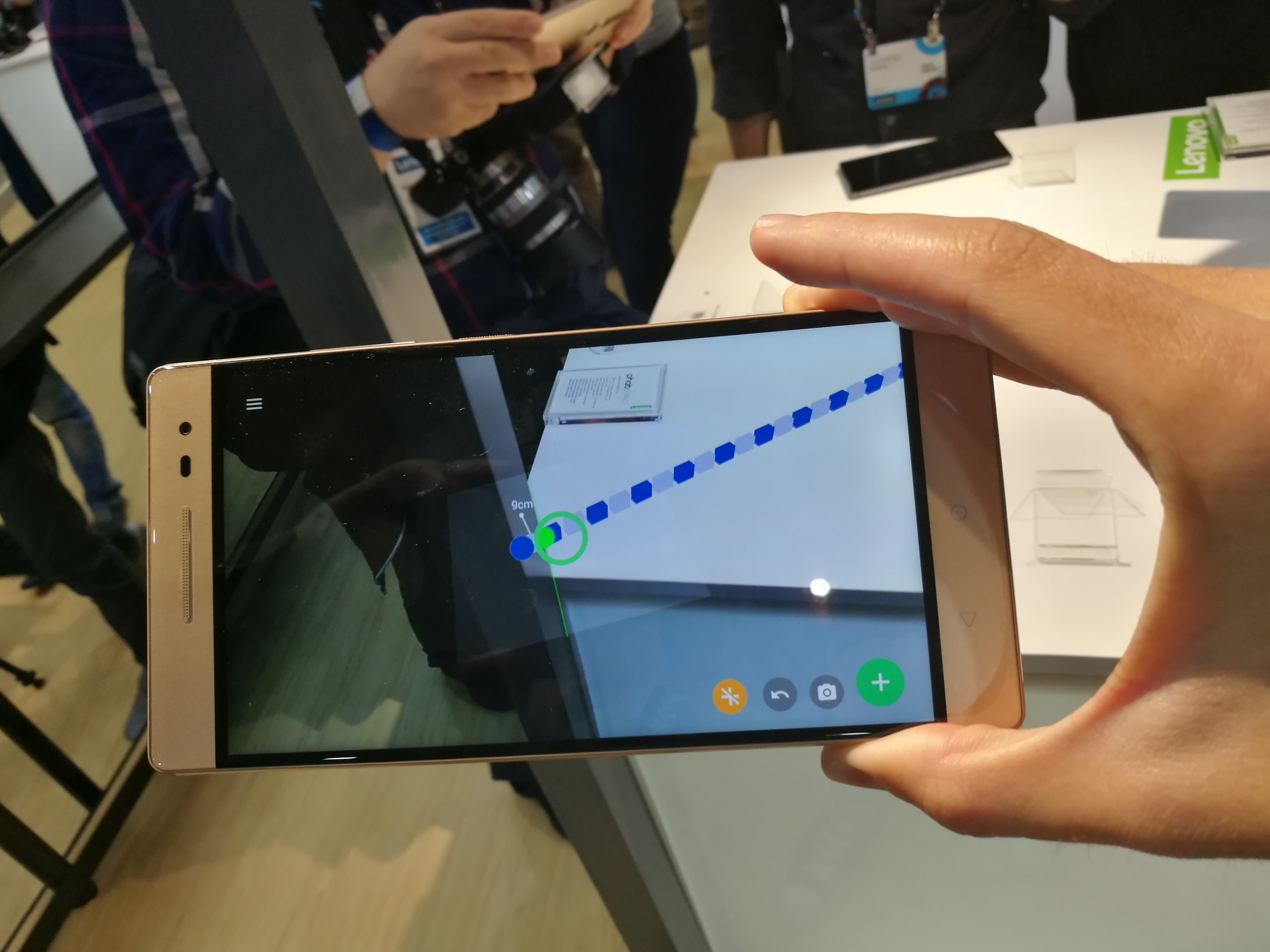 Above: A Google Tango app on the Lenovo Phab2 Pro.

And there’s a good amount of room to see everything trippy that’s made possible with multiple cameras and a specially tuned processor. It also looks damn good and performs admirably for regular mobile computing tasks — like web browsing — against a nearly stock Android Marshmallow backdrop. The display is bright and colorful (and not full of noticeable pixels).

But. The expansiveness of the display has a downside. At 6.4 inches diagonally, this is a sizeable handset. So it’s big. And it’s also not light, at more than half a pound. What you end up with is something that’s not very comfortable to hold in one hand for an extended period of time. I found myself switching hands again and again.

That’s not abnormal for a phablet. But it doesn’t feel just right. At its current size it’s unwieldy, and I repeatedly found myself hitting the home button and hurtling myself out of Tango apps by accident. That’s too bad for a device that’s meant to showcase a new technology. 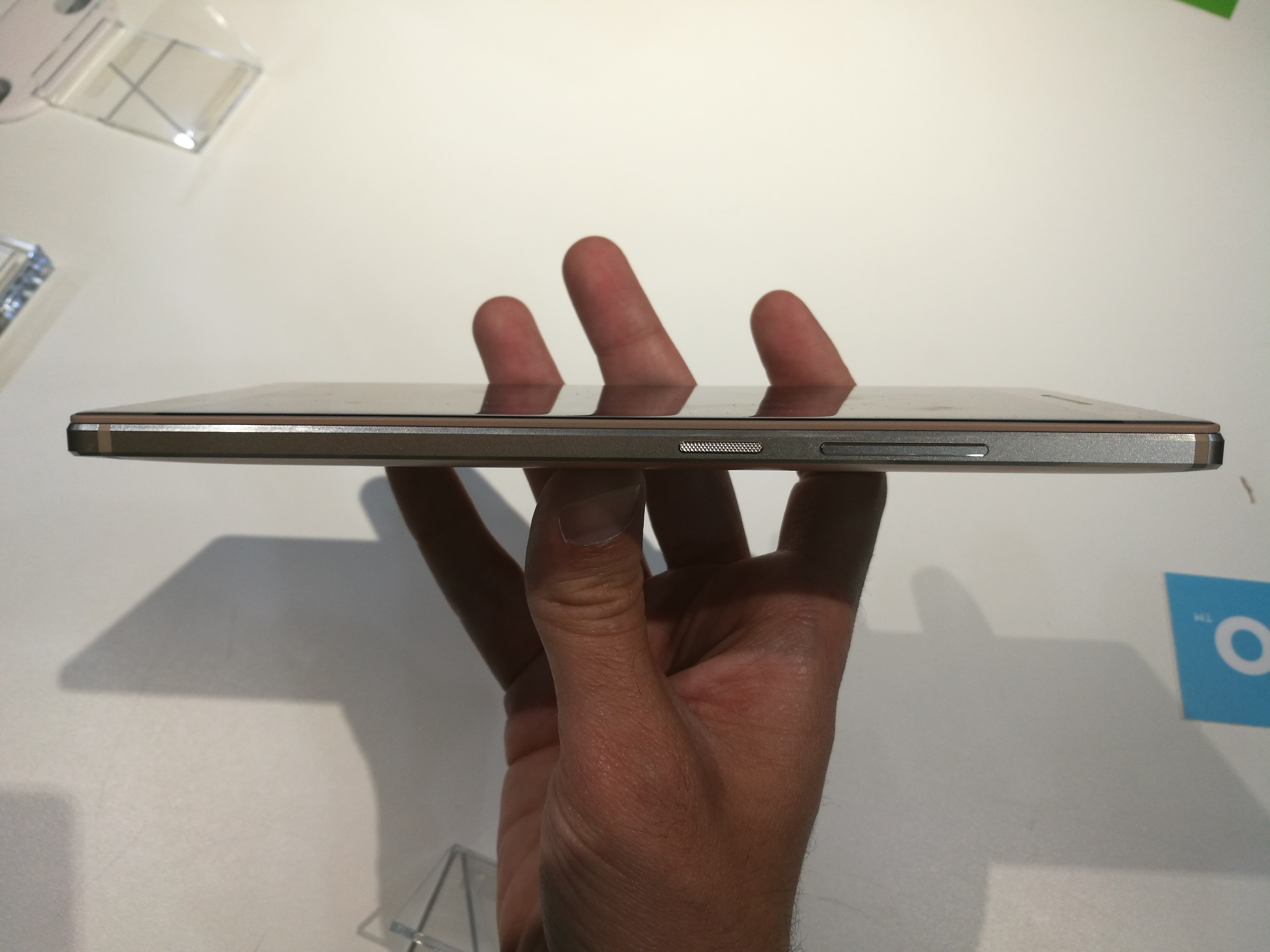 Above: The Lenovo Phab2 Pro from the side.

Jeff Meredith, vice president and general manager of Lenovo’s mobile business group, assured me that future Tango-ready devices from his company will be both bigger and smaller than this one. Personally I’ll be keen to try the smaller ones, even if that means I’ll have a narrower field of view and will have to move the phone around more to get a good sense of the AR scene in front of me.

Lenovo’s other two new Phab2 phones, including the dual-camera Phab2 Plus, also have AR capability — through something called LenovoAR. Open the camera app of the Phab2 Plus and select the AR option, and you’ll see a few odd buttons. One has a fish on it. Push the button, and as you look at the display representing what’s in front of the phone (using the rear camera), you’ll see things zooming by in a blur. What are they? Fish, of course. This is a gimmick. It’s AR, yes, but it’s not going to run Tango apps. And I doubt it will be enough of an attraction to make people buy it.

The dual cameras — accessible only through the Dual Camera mode of the camera app, because they apparently are not on by default — are also not astounding. The Huawei P9, which is also armed with dual cameras, produced clearer, more detailed images, with or without zoom, in my testing over the past few weeks. 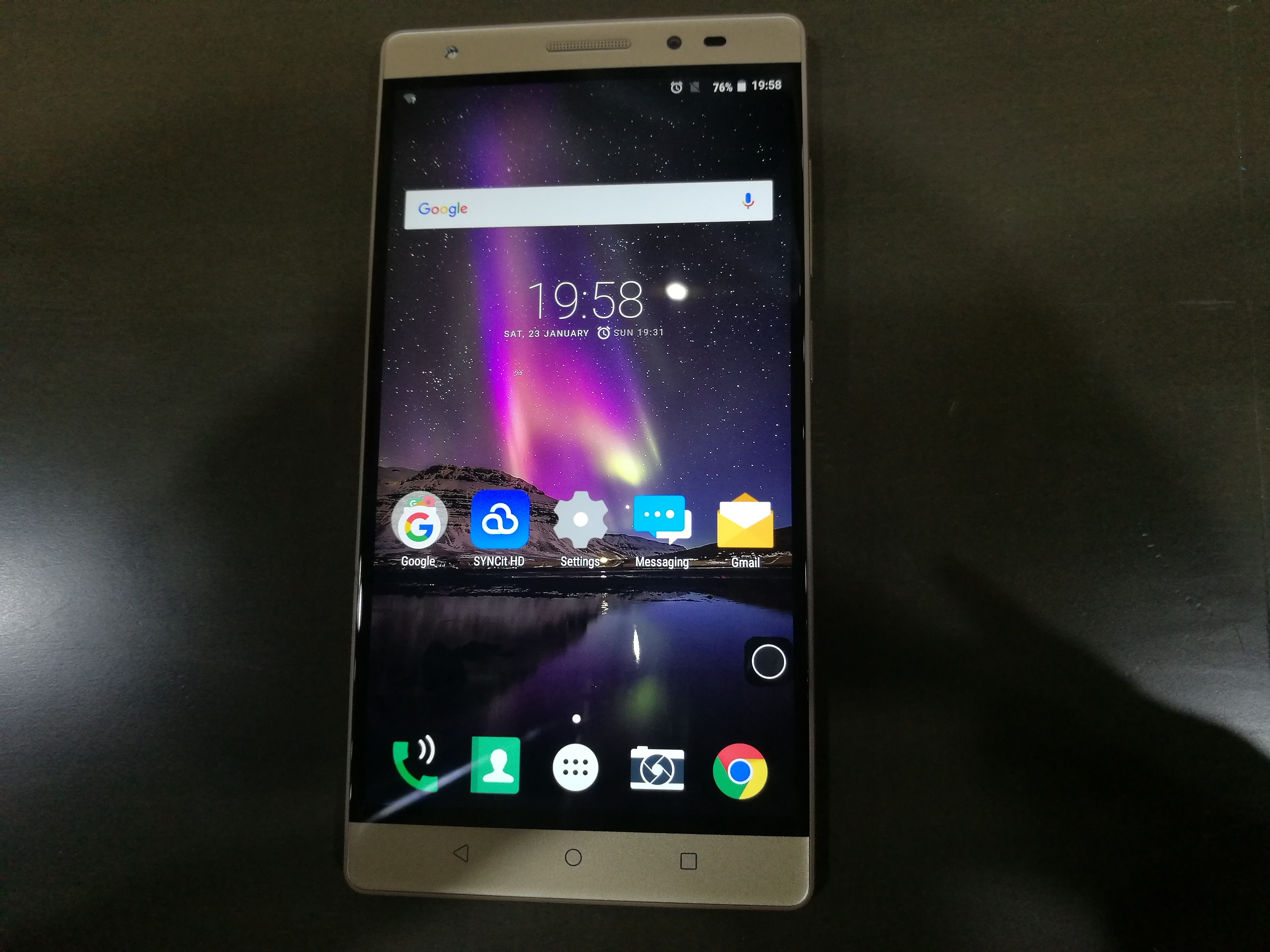 Above: Lenovo’s Phab2 Plus.

The camera app on the Phab2 Plus has a night mode that compensates for poor lighting, and while that could come in handy in certain situations, I found that it made certain parts of some test photos too bright. There are ways to edit out parts of images and put them on top of exotic backgrounds. It was cheesy.

And on top of that, it’s just as big as the Phab2 Pro. Altogether, then, the Phab2 Plus didn’t seem to be the impressive bargain phone I’d hoped it would be. Although it may be a good answer to the Nexus 5X from LG.

Things get more interesting with the new Moto Z phones.

The thinner of the two is the Moto Z. It’s considerably thinner than the appropriately named Phab2 phones. And, in contrast to the Moto X and the more recent Moto X Pure Edition, it’s nice and straight on the back. Well, almost. There’s a camera bump that Lenovo made no attempt to hide by smoothing it out.

And on the bottom of the back, you’ll find 15 golden dots that are reminiscent of the Smart Connector on Apple’s iPad Pros. These dots are the way the Moto Z communicates with the new Moto Mods — like a charger and a speaker. The mods, or just coverings, in case you don’t like the raw unprotected back, snap on and off magnetically. They’re fun and, most importantly, easy to use. 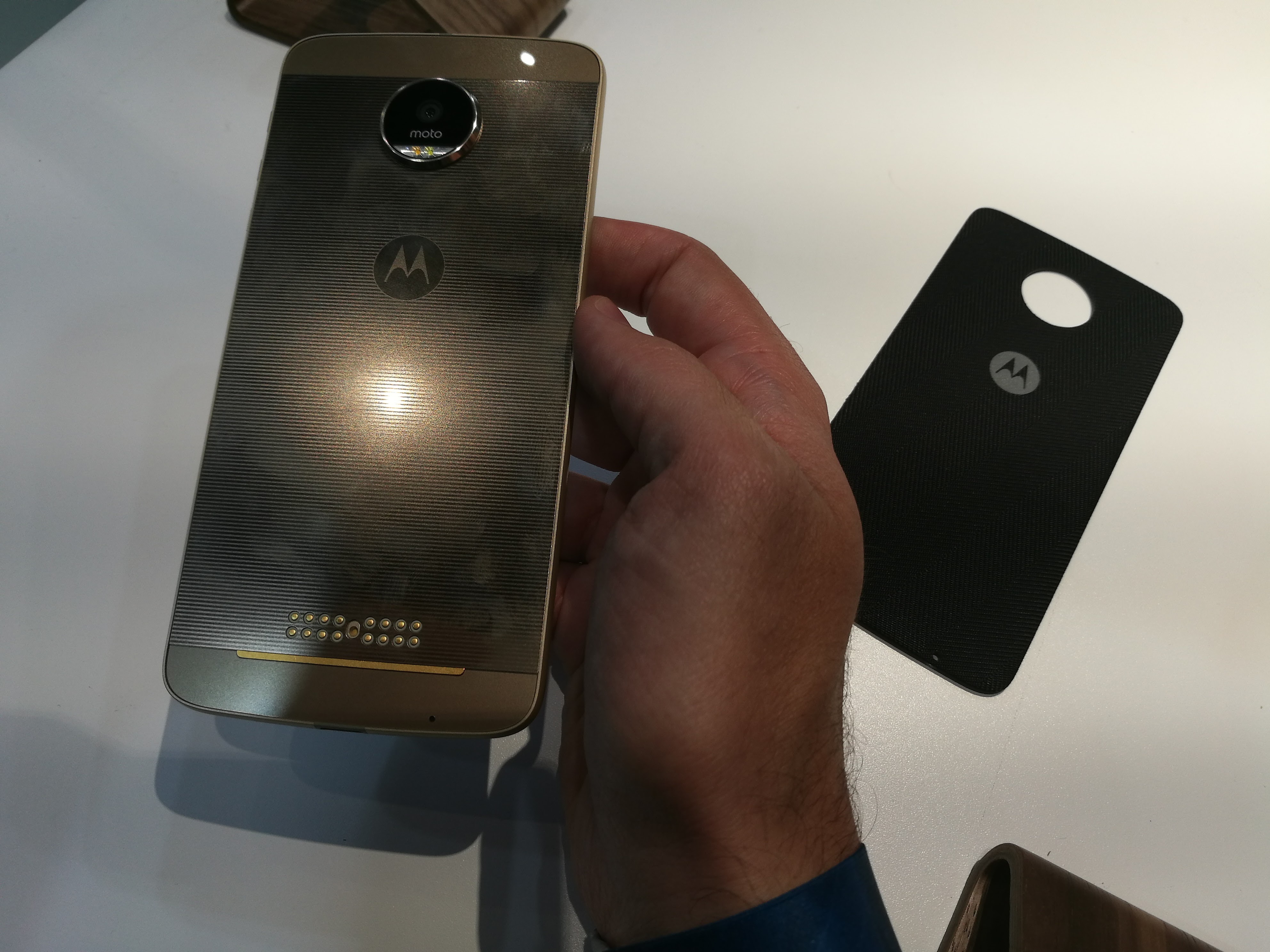 Above: Lenovo’s Moto Z, and an attachable backing on the right.

The camera app is the classic one from Motorola phones — just tap anywhere onscreen to shoot, by default. Photos made with the 13-megapixel rear camera were not the most impressive. But there is a fingerprint scanner on the front of the device below the display, and that’s a wonderful and welcome addition.

The Moto Z Force has a fingerprint scanner and mod support just like the Moto Z. But the screen is shatter-proof, wow! And the rear camera is a 21-megapixel shooter. 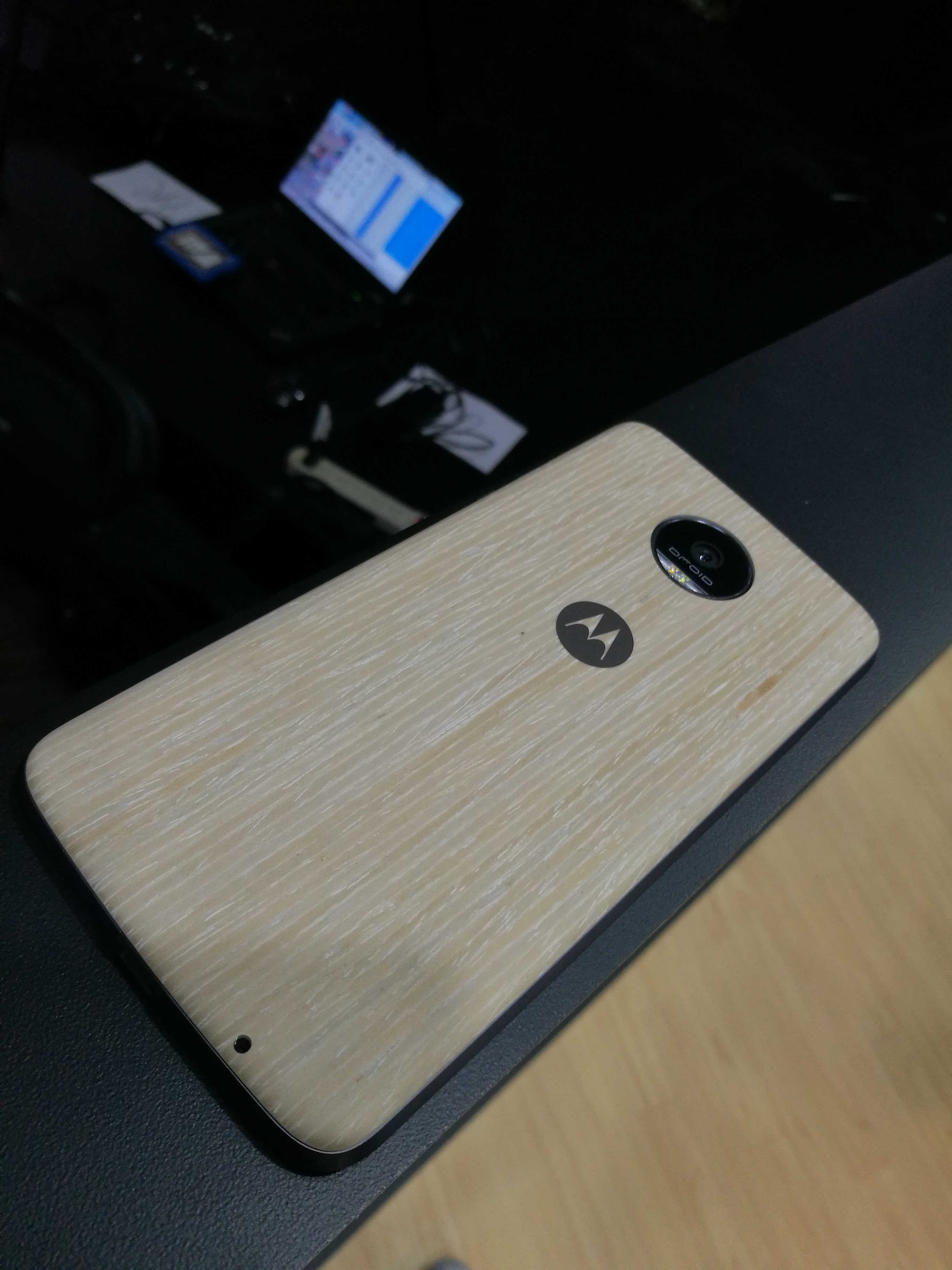 Above: The Moto Z Force with a case on it.

It’s thicker and a bit heavier than the Moto Z, but the camera’s performance is clearly better.

But the display does not look quite as spectacular as the Phab2 Pro, I must say. Colors just don’t pop as much. 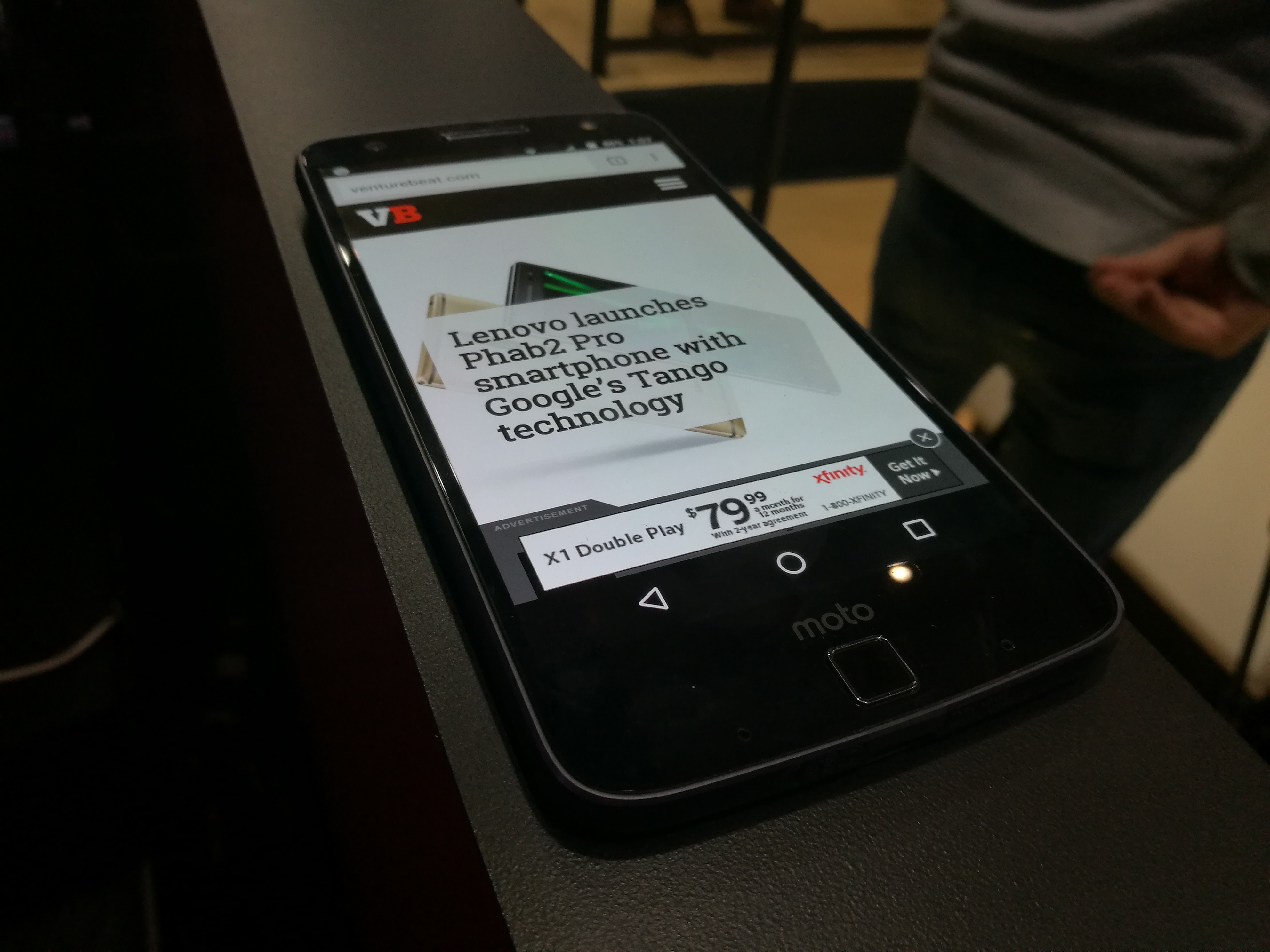 Above: The front of the Lenovo Moto Z Force.

Still, of all the phones Motorola announced today, I imagine that this one will turn out to be the most popular — although if Lenovo decides to stick a high pricetag on it, that hunch could prove to be wrong.

We’ll get a better sense of all these things once we receive review units.