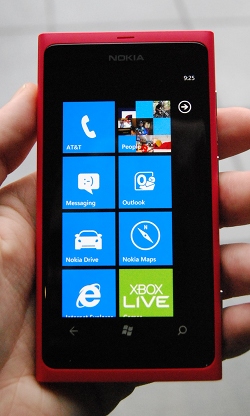 Nokia finally let its wildcat out of the bag on Wednesday morning with the announcement of its Lumia 800 and 710 smartphones, its first phones running Microsoft’s Windows Phone 7 operating system.

Nokia has a lot to prove with the new devices, and it needs to recapture the fanbase it once had around the world. Although a little bit of thunder was stolen from the company by a major leak yesterday, these phones pose a lot of interesting questions. Can Nokia bring itself back from the brink? What can it do to differentiate its Windows Phones from the likes of Samsung and HTC?

I got my hands on its two new smartphones and gave them a spin to see how they perform and if they could lead Nokia’s way back to being a mobile powerhouse.

First up is the Lumia 800, Nokia’s first flagship device running Windows Phone Mango, otherwise known as Windows Phone 7.5. You can see the device as pictured to the left, and what you can’t see is that it feels really well made and solid in the hand. Nokia has a history of smart, decidedly European industrial design and the Lumia 800 shines in that regard.

Coming in black, cyan, and magenta (pictured), the Lumia 800 exudes a lot of charm, but less power than what Apple and major Android manufacturers are peddling. The Lumia 800’s screen measures 3.7 inches and while its AMOLED display doesn’t have the oomph of a Samsung Super AMOLED Plus screen, it still looks nice and worked well even in bright natural lighting. (Also take a look at the side-by-side photos of the Lumia 800 next to an iPhone 4S to get a better feel for its design and size.)

Running on Windows Phone Mango makes the device so much better than if it was running clunky, outdated Symbian software (which pretty much killed Nokia’s N8 last year). As much as I liked Symbian pre-iPhone and pre-Android, it never evolved to match the needs of consumers who grew to love simple and touchscreen-ready mobile OS operating systems.

Mango makes the Lumia 800 experience smooth and friendly, even if the power under the hood isn’t top notch. Inside, the Lumia 800 has a 1.4-GHz single-core processor, 16GB of internal storage and an 8-megapixel camera with 720p high-def video capture. While we couldn’t sit down and analyze the picture quality, I’ve been generally impressed with Nokia’s Carl Zeiss lenses and it’s nice to have a hardware button to push down for capturing photos.

Now let’s look at the Lumia 710, the less expensive (and less equipped) cousin of the 800. The Lumia 710 doesn’t have as nice of style and feel as the 800, but that’s what you get for it being a cheaper device. The 710 is an obvious play at being a cheaper Windows Phone that may end up selling for $99 or less on a 2-year contract, whenever Nokia brings the devices stateside in 2012.

For hardware, the 710 also has a 3.7-inch screen and 1.4-GHz CPU, but it offers less storage with 8GB and a 5-megapixel camera. It’s battery is also a bit smaller and rated for less talk time. In the design area, the 710 brings back Nokia’s play with mixing and matching colors. The 710’s backplate is interchangeable with black, white, fuchsia, cyan and yellow cases. A Nokia rep told me the 710 owners will be able to purchase additional back covers online.

Overall, both the Lumia 800 and 710 smartphones feel exactly as expected — Nokia’s smart design mixed with Windows Phone 7’s convenient and smooth operating system. If you’re looking forward to getting one, I’d pony up more for the Lumia 800, as it promises the best possible experience.