Like virtually every Apple TV customer, I truly wanted Apple to succeed with its TV-tethered set top box — an enabling device for early cable TV “cord cutters.” I bought into the vision back in 2007 when it took the form of a stripped down $299 Mac computer, went along for the ride when it devolved into a tiny $99 video streaming box in 2010, and kept my fingers crossed when 2015 and 2017 models added iOS-style apps and games to larger $149-$199 enclosures.

Early on, Apple famously described the Apple TV platform as a “hobby.” But after 12 years of waiting for it to reach iPhone, iPad, or Apple Watch levels of success, and seeing only modest interest from consumers, it’s tempting to call it a failure.

I wouldn’t go that far, but like many people, I’ve tired of waiting for Apple to conquer the living room. It had so many opportunities — and even patented a bunch of them — including DVR functionality, TV-based video teleconferencing, and folding Apple TV into actual TVs. One by one, those plans have seemingly evaporated, leaving Apple TV devices as islands: Apple-curated menu and app experiences accessible only from a TV set’s HDMI input. Switching to that input has remained an annoyance, particularly for those of us with game consoles and other devices competing for HDMI ports.

That’s why I was excited this week when Roku released an Apple TV app for Roku devices, importantly including third-party Roku TVs. The app gives Roku users access to the one thing Apple TV has done well for years — streaming Apple-curated videos — while nixing the need to switch to a separate HDMI input just to see iTunes purchases and rentals.

Apple’s reason for making the move now is obvious: Its Apple TV+ subscription video service launches next month. As of mid-2019, Roku controlled a majority of the U.S. streaming box market — just under 30 million active users — and estimates have pegged it as having roughly four times Apple’s share. Like Samsung, which made a deal in January to bring a similar Apple TV app to its TVs, Roku offers Apple access to a much larger audience of potential Apple TV+ viewers and subscribers, including lots of people who didn’t already own Apple TV boxes. 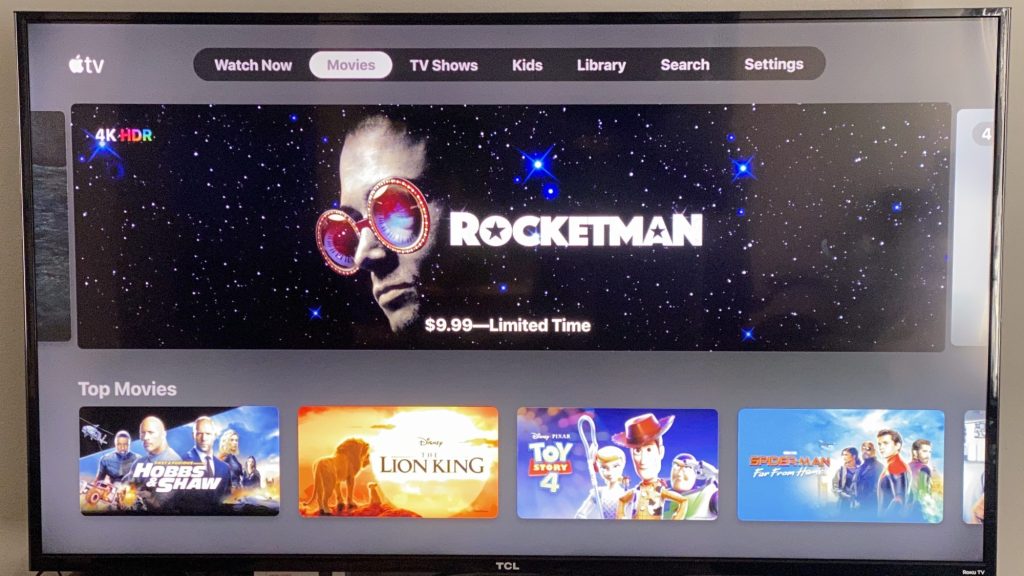 But there’s certainly some overlap between prior Apple TV users and Roku or Samsung TV users, including my household. I was very glad to see the Apple TV app pop up on my two TCL-made Roku TVs after a brief initial period of uncertainty and server propagation. As our Roku TVs have become more capable, including adding apps and Alexa integration, my wife and kids have been asking for a simpler way to access Apple content than screwing around with separate Apple Siri remotes and interfaces.

Roku’s Apple TV app makes that possible. As shown above, it looks virtually indistinguishable from the TV app that runs natively on Apple TV HD and 4K boxes, which is to say nicer than the versions made for iOS, iPadOS, and macOS. There’s a pill-shaped bar at the top to let you separately browse movies, TV shows, kids’ content, and your library, while Watch Now features the same full-screen imagery of featured and recently browsed content, minus only the latest tvOS software’s live video previews. 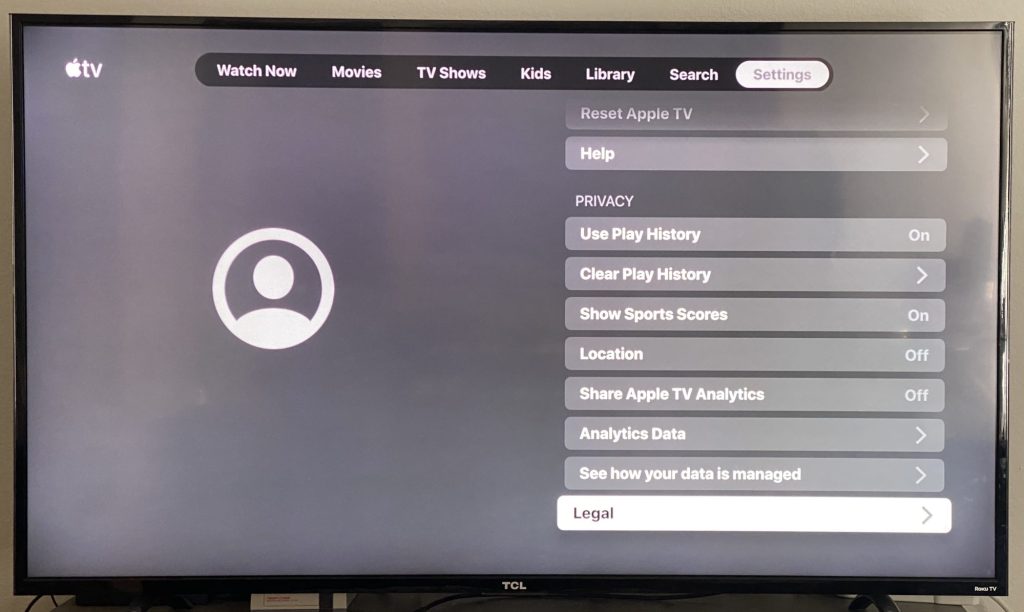 By comparison with other third-party Roku apps, Apple also includes a surprisingly large collection of settings, including a robust privacy section that lets you see and manage app analytics data, turn play history data on and off, and enable or disable location information. Apart from the brutal version number (“2.0.0.2R115:3.0.0 (roku4-2R115)”), all indications are that Apple had a major role in developing the app, perhaps even doing so internally, as there don’t appear to be any credits to outside developers — arguably no surprise given that we’re talking about Apple.

From a user experience standpoint, the Roku app is essentially a slightly slower version of what you’d get on a native Apple TV device. You’ll notice it taking a moment to load from the main Roku menu, and sometimes briefly spinning the waiting wheel when accessing content. Visual transitions that are smooth on Apple’s device have just enough of a stutter here and there to remind you that you’re not enjoying the “seamless integration of hardware and software” that you’d get from a $149-$199 Apple TV box.

But at this point, that doesn’t really matter. As smart TV prices have dropped, Apple’s own devices have stood still at the same price points, such that you can now buy an entry-level Samsung smart TV with Apple TV app support for only $100 more than a standalone Apple TV box. Unless you’re really interested in playing Apple Arcade games on your TV, or deeply appreciate the added speed of an Apple TV box, there’s little need for the standalone device any more. Apple TV might not be a failure, but it’s not essential, either.

Heading into 2020, Apple’s best shot at continuing to have a role in the living room is to reach as wide an audience as possible with the Apple TV+ video service. Just as with the Apple TV hardware and App Store before it, it’s unclear whether Apple will really be able to monetize Apple TV+ subscriptions — at least to the point where it’s making profit over its multi-billion-dollar content investments. But it’s obvious that doing so will require it to go beyond its most die-hard fans and reach more viewers, even if that means causing some people to cut the cord with its hardware. Though the standalone Apple TV app isn’t perfect, I’m glad to finally have that option.