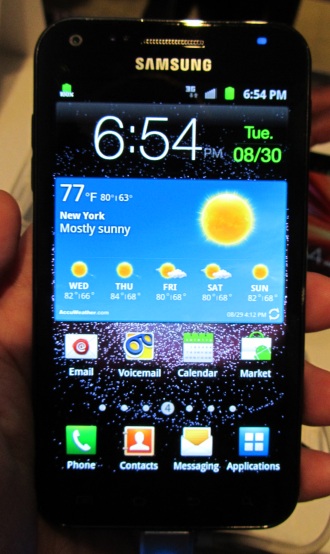 Samsung on Tuesday launched three powerful new Android phones under the Galaxy S II banner, corresponding to the three U.S. networks that will carry them: AT&T, Sprint and T-Mobile. We got a little closeup time with these monsters of the smartphone universe, and they’re pretty impressive.

The devices are basically variations on a single theme, though each one has a few unique tweaks. On AT&T and T-Mobile, the phone is called the Galaxy S II, while on Sprint it’s the Samsung Epic 4G Touch.

The company’s timing is good. Later this fall, Samsung will most likely have to contend with the Apple iPhone 5 and other powerful Android phones like the Motorola Droid Bionic and Droid HD, so it’s getting out of the gate early with these new Galaxy devices.

At the Samsung Experience in New York City, Samsung showed off the new smartphone. And the company wasn’t shy about tooting its horn.

“This is the phone that all phones will be measured against in the future,” Todd Pendleton, Samsung’s new chief marketing officer, said.

But does it live up to the hype? Our first impressions are good, though we’ll need more extensive testing to be sure.

All of the devices feature an ultra-thin form factor, some form of 4G, a brilliant AMOLED screen, an 8-megapixel camera that records 1080p video, a 2-megapixel front-facing camera, 16GB of onboard memory and a microSD slot that can take up to a 32GB memory card.

From spending a little time with the AT&T and Sprint models, it must first be noted that the devices share a lot of similarities with the first batch of Galaxy phones, which were quite good to begin with. The new models appear to be a good sequel to an already fine first act.

All the devices have Android 2.3.4 software and 1.2 GHz dual-core processors, so one would hope these phones would be fast, and indeed, they were incredibly responsive. Moving through the home screens and launching apps were the fastest I’ve seen on an Android phone.

When it comes to screen size, there’s big and bigger. The AT&T and T-Mobile Galaxy S II phones have a 4.3-inch AMOLED screen, while Sprint’s Epic 4G Touch has a 4.52-inch screen. Both the 4.3-inch and 4.52-inch screens had excellent displays that rendered colors brightly, while pictures and text were easy on the eyes. The difference in screen size between 4.3 and 4.5 inches makes only a slight difference when it comes to the devices, but if you want to watch movies or play games on your phone, you may want to opt for Sprint’s larger model.

At first glance, the new Galaxy S II line of phones are strong contenders for the Android smartphone throne. We will need a little more time to further digest the devices to find out if live up to their first impressions.

For now take a glance at a few photos below.