Your body is in a real car traveling through Southern California on a clear, sunny day. Meanwhile, your eyes are seeing a buggy traversing a foggy, haunted park at night, as a wireless system silently synchronizes all of the buggy’s motions to match the actual movements of the car. The goal is to transform boring slogs through traffic into narrative, immersive entertainment — at least, for lucky passengers.

Welcome to Bride of Frankenstein Holoride, which is being billed as the world’s first in-car virtual reality experience available to the general public. The software, actual cars, and hardware have been supplied by Universal Pictures, Ford Motor Company, and Holoride, a vehicle-agnostic VR spin-off from German automaker Audi. Starting next week, they’ll be offering free rides at the Hollywood location of Universal Studios, effectively a live beta test of next-generation in-car entertainment.

If my Bride of Frankenstein experience this week reflects the future of transportation, we may be approaching the end of dull rides and backseat arguments between antsy siblings — unless there aren’t enough VR headsets to go around. Here’s what my brief VR driving experience was like, and details on how you can try it for yourself.

From 12 p.m. to 8 p.m. each Monday, Tuesday, and Wednesday from October 14 through October 30, then at the same times Monday through Saturday on the week beginning November 4, Holoride is offering complimentary 5-7-minute rides like the one I took this week. Arriving at your scheduled time, you’ll sign a waiver, jump into the back seat of one of several 2020 Ford Explorers at Universal CityWalk in Los Angeles, put on an Oculus Rift headset, grab a controller, then sit back and have fun. As a professional driver safely handles all the actual point A to point B navigation, you’ll watch a computer-generated 3D environment that moves in sync with the car, and participate in an interactive adventure. 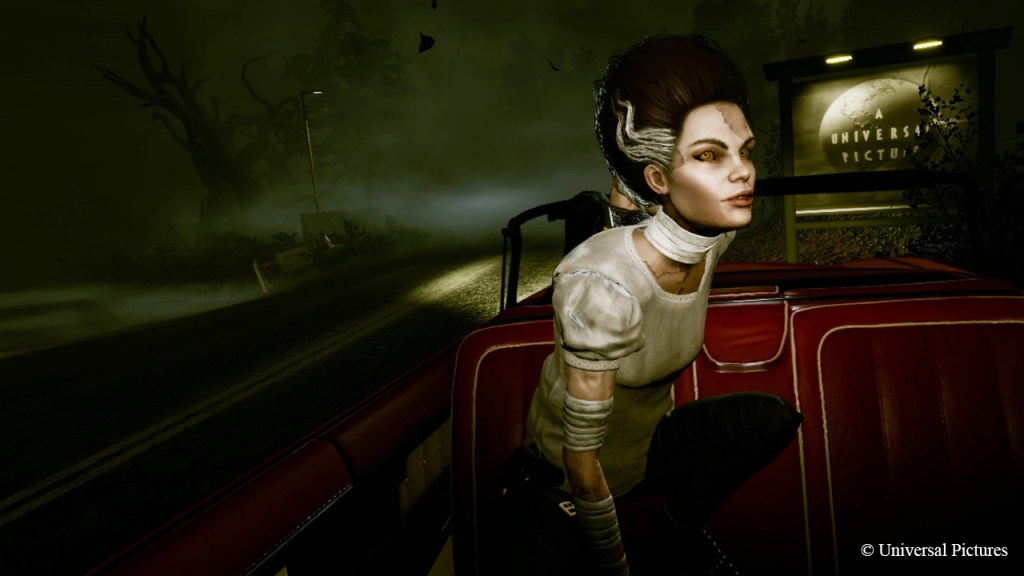 As is typical of a VR experience, you can turn your head in any direction and look around, even away from the Bride as she’s speaking with you. The level of visual and sonic fidelity is PC-quality, which is to say that viewers will be more pleased by the realism of the characters, environments, and audio than distracted by obvious polygons or other rough edges. Universal paired with immersive studio Rewind to develop the content, which runs in Holoride’s Unreal Engine- and Unity-compatible 3D environment. Syncing real-world telematics data from the car, the entertainment relies on car turns, acceleration, braking, and bumpy terrain to change what appears on screen, such that if the real vehicle swerves or hits a pothole, the virtual one will, too.

While the collaborators don’t describe the experience as a game, and there aren’t any points to be earned, you effectively act as a bodyguard for Universal’s classic movie character, the Bride of Frankenstein. Her carriage is under attack by ghosts who need to be zapped away, so you work together to zap them. As your hand grips an Oculus controller in 3D space, you feel the G-forces of actual car motions, and see corresponding changes in the visuals: The road twists, the Bride jostles in her seat across from you, and stopping the ghosts in mid air requires at least a little compensation for all the movement. 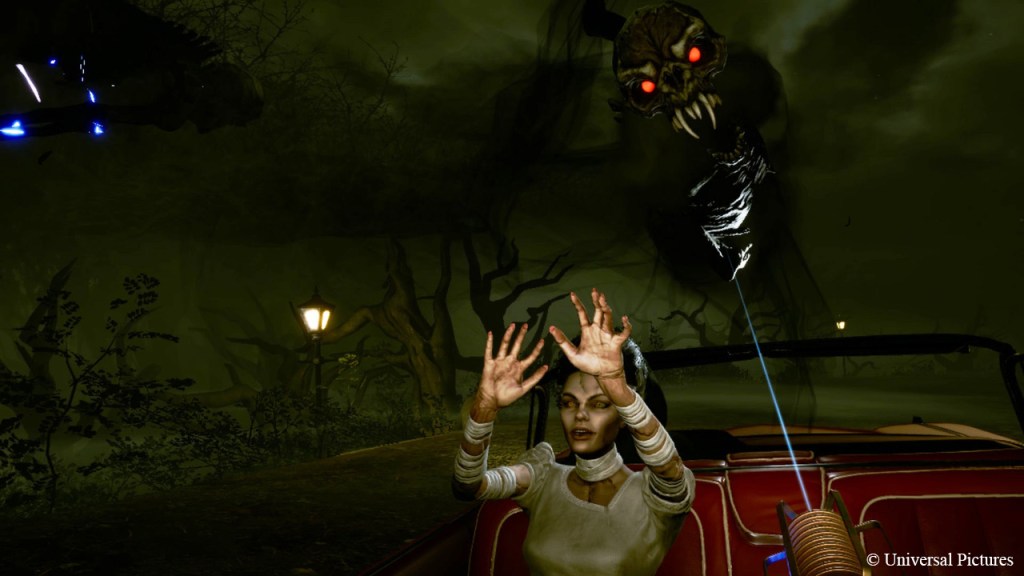 And then, much faster than the 5-7 minutes you were told it took, the ride is over. If you’re like me and enjoyed what you experienced, you’ll be ready to go again — just like a good simulator in the theme park. But since Holoride is free, and apparently going to be promoted around CityWalk, there will likely be lines.

There’s only one reason Bride of Frankenstein Holoride is being offered at CityWalk rather than sitting behind Universal’s ticketed theme park gates: The developers are looking for broad public input on the in-car VR experience before offering software and content more widely. Holoride is positioning itself as the intermediary between a carmaker’s telematic data, a content provider’s entertainment, and a self-supplied third-party VR headset, rather than trying to sell car buyers on a dedicated backseat VR entertainment system.

“We developed our tech to be manufacturer agnostic and open to content creators,” Holoride CEO Nils Wollny told me, “and we’re developing an application that runs on standalone mobile, untethered VR headsets, so that people can bring the device they have at home, download the application to their device, and then it seamlessly connects with connected vehicles … So every car that will be enabled in the future will also hopefully become an outlet for the commercialization.”

The words “enabled in the future” make Holoride sound far-flung, but Wollny says the necessary vehicle technology is already here. “The good news is that it works with modern vehicles,” at least those “that have a computing entity on board for drivers, assistance systems for navigation, and a system for connectivity in general … All this information that is present in modern vehicles, we can just simply read with our software and create the experience that matches 100% the movement of the vehicle.” 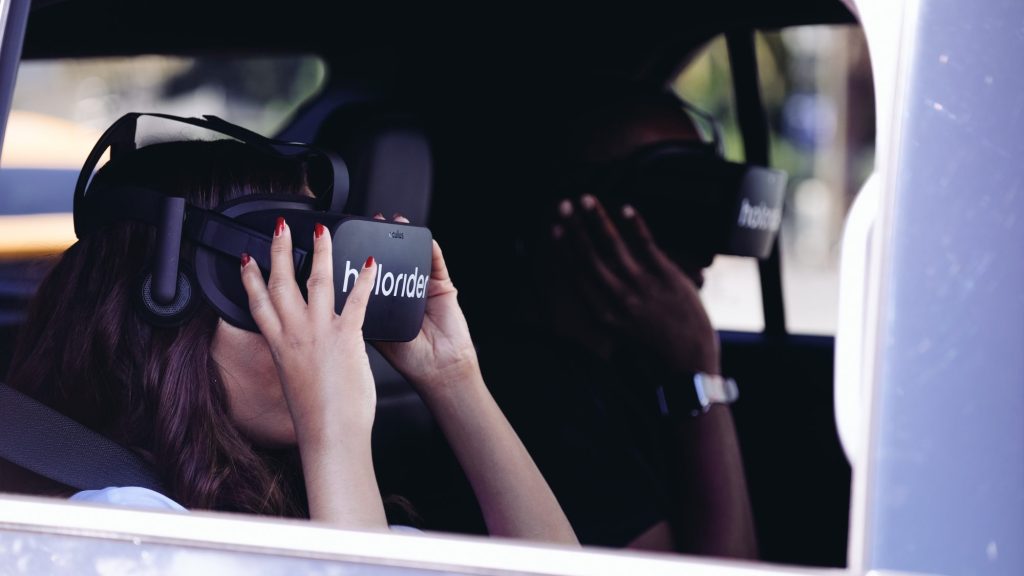 Getting automakers to share the car’s telematics data for entertainment purposes is the next step, and historically, car companies have lagged years behind tech companies’ most cutting-edge innovations. So I asked Albert Choi, Ford’s partnership lead on content digital services, whether there’s already a Ford vehicle that ships standard with the hooks necessary for Holoride.

“This is still an exploratory discussion,” Choi explained. “We’re trying to understand at a high level what it is that customers are interested in. And really to understand from an immersive experience standpoint, what makes the most sense.” So is there actually telematics-sharing hardware in an existing Ford car? “We have the capabilities to do that,” he said. “But at this point, just from a commercial delivery standpoint, we haven’t made a decision about how we’re moving forward. From a hardware standpoint, the capabilities do exist.”

Put another way, Ford — like other carmakers — is waiting on positive consumer feedback before enabling existing and future cars to share their data for these purposes. Hence, the Universal CityWalk public beta test.

As Universal Pictures technology partnerships VP Greg Reed noted, “We’re running for essentially a month, and have real consumers being able to access these vehicles, as an attraction and experience here on our property … We’re going to get quite a few people through this experience, and probably the biggest throughput that we’ve ever managed to get — it’s gonna be big.” 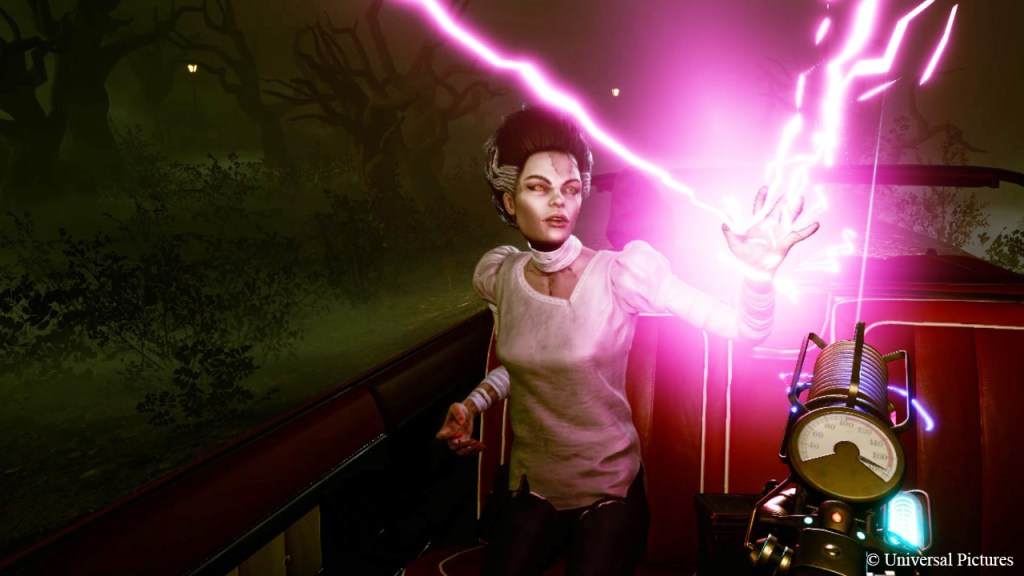 While the feedback-gathering process is important, the other aspect is exploring a wholly novel opportunity for content creators, Reed told me. “It’s a contained environment, for now, but with the promise of being able to create content that may be relative to the destination you’re going to, the journey that you’re taking — that’s kind of a new kind of canvas now … For creators, this is a great way of experimenting with some IP that we haven’t worked with for a while. And we’ll be asking questions: Was the experience good? Would you be willing to pay for this, if it was a paid experience? Would it entice you to take activities that we may be incentivizing, like going to the movie theater?”

Entertainment is expected to be the biggest market for in-car VR, but the Holoride team is looking into other applications as well. “You can also think about educational experiences. We’ve showcased a future city educational experience, and a drone flight. So there are a vast amount of opportunities for what you can do with it. Or you can even think further. You can think about productivity applications in the future that they’re balanced out with the movement of the car so less people get motion-sick.”

Working on spreadsheets in VR won’t be as fun as riding shotgun with the Bride of Frankenstein, so if you’re in the Los Angeles area, take Universal up on the opportunity to experience its ride during the Halloween season. You can sign up in advance at this website, or visit Universal CityWalk’s designated pickup location to request an open time slot. Multiple vehicles are equipped with the Holoride hardware, and the rides aren’t super long, so the turnaround should be pretty quick. 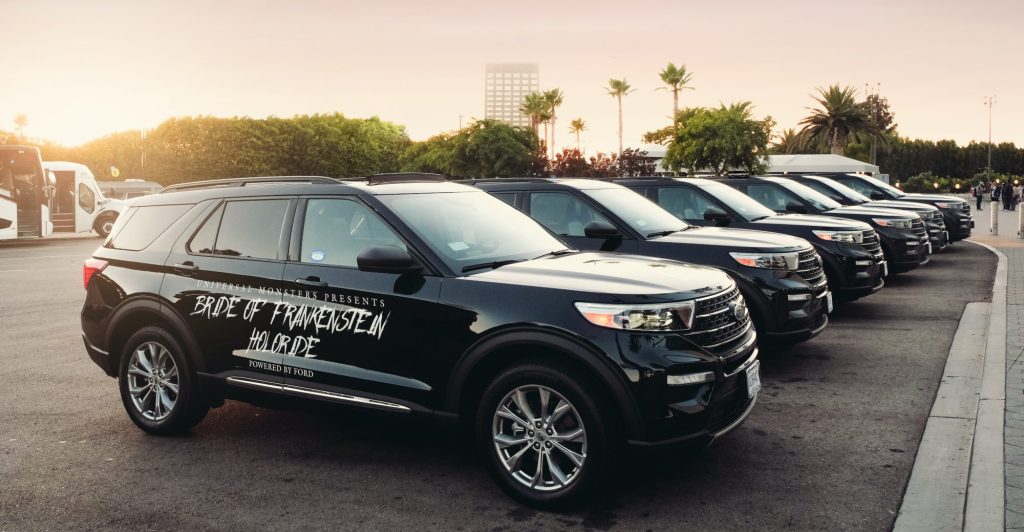 Participants need to be 13 years or older for the ride, which was a bummer for my kids, who were both too young to use the Holoride VR headsets. By the time they’re officially old enough, I’m pretty confident that Holoride and its partners will have software solutions available to cater to them in actual cars outside of Universal’s lots.