Amazon’s long-awaited set-top box is finally here, but is it enough to take on entrenched competitors like Apple, Roku, and just about every game console?

At this point, it’s tough to tell if the Fire TV will own the living room like Amazon hopes it will. But judging from my short time with the device today, it’s a solid entry in a market that desperately needs some innovation.

Amazon clearly didn’t sweat the design of the Fire TV too much: it’s a black square. That’s about it. It’s a device that clearly is meant to disappear into your entertainment center. It’s about as tall as a dime is wide, so you should be able to hide it just about anywhere.

The Fire TV’s remote control is another story — it’s curved and fits well in your hand. It sports typical playback buttons, but its big innovation is the microphone button at the top. Tap that, and you can search the Fire TV’s library for just about any actor or title, just by speaking. It sure beats tapping out letters one-by-one on the Apple TV or Roku’s remote. And as I’ve already reported, the Fire TV voice search feature works well. 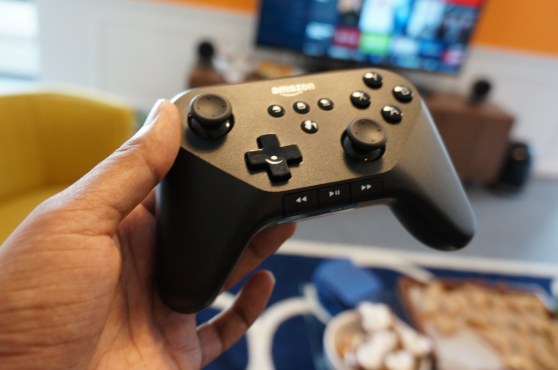 But while the Fire TV’s remote seems surprisingly thoughtful, Amazon’s Fire TV game controller seems shockingly dull and ugly. It’s pretty much the same as the leaked image we saw a few weeks ago. It’s big, the directional pad feels stiff and unresponsive, and the analog sticks feel sort of cheap. As my VentureBeat colleague and fellow gamer Eric Blattberg quipped, it feels like a crummy third-party Xbox 360 controller.

I may warm up to Amazon’s game controller over time, but after testing it out a bit at the media event today, I can’t imagine any hardcore gamers are going to be satisfied with it. For example, moving my character around in Sev Zero, Amazon Game Studio’s first title for the Fire TV, felt sloppy and loose. That’s not something you want in a fast-paced shooter.

I’ll have to spend a lot more time with the Fire TV before I issue any final judgments. Expect further impressions soon, followed by a full review next week.