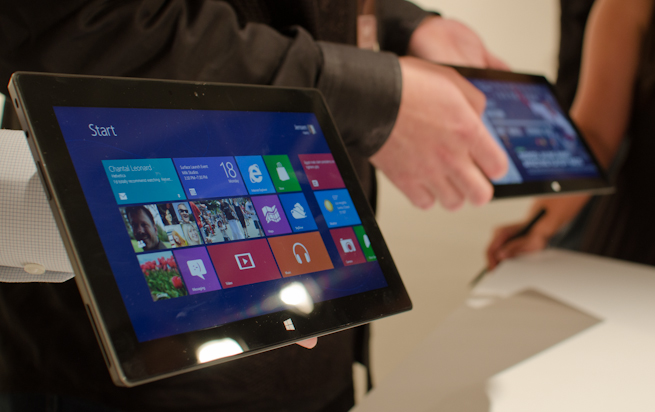 Surface certainly looks like a high-end tablet, much like the Zune HD still does today when compared to other media players. The Surface is very sleek, with hard lines, a very specific curved edge design, and extremely well defined buttons and components. Just like Windows Phone 7 and Windows 8’s Metro UI, the entire Surface tablet is about contrast, in feel, touch and looks, although the metallic grey case doesn’t really match the design we expect from a high-end tablet. Devices like the iPad and even the Samsung Galaxy Tab 10.1 are more pleasing to the eyes. 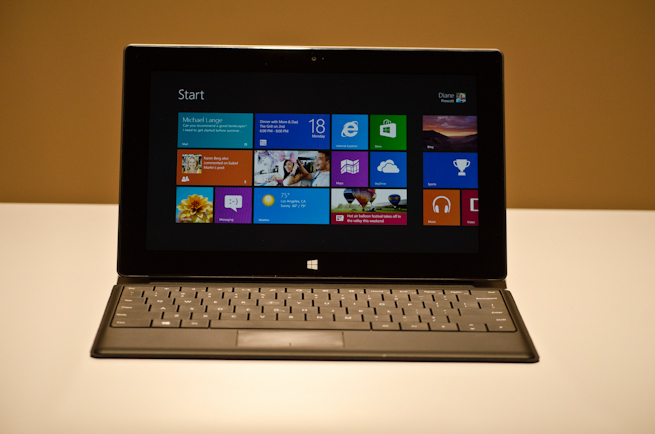 In the hand, Surface feels very dense, and it is. According to Microsoft spokespeople at the event, if anything else were crammed into it, the tablet would be thicker than its 7.3mm frame. The angular edges make the Surface easier to pick up, and it lays flatly on a desk or table, which is uncommon for tablets. However, while it’s easier to pick up, it’s not easier to hold immediately. The Surface’s case and frame are made of a magnesium alloy named VaporMg, which is specially molded similar to the recent HTC One S smartphone (non-US models).

The case actually has a glossy feel, so it’s strange to hold. One the one hand, it’s easier to grip, but with some time it could end up slipping and feeling uncomfortable. However, I wasn’t given a lot of time to hold the device, so it’s unclear what the level of comfort of the Surface will be over time. Surface also has a built-in kickstand, which Microsoft employees showing the device popped in and out with ease, but I found difficult to set up. It is certainly strong and durable, made of the same material as the rest of the case, but it is also very tightly connected via magnets to the body.

Above: Here you can see the magnetic dock clamp for the keyboards and future peripherals

There are a few interesting points on the Surface. The Touch Cover and Type Cover, two covers that are very similar to the iPad’s Smart Cover (except that both of Microsoft’s are actual keyboards), connect magnetically to the Surface for both typing and as the cover. Six metal panels connect the two and transfer data and power between devices. The Touch Cover is a pressure-sensitive full QWERTY keyboard that is ten times more sensitive to keypresses than traditional keyboards, and is just 3mm thick. It comes in five colors, and each color has its own textured feel. 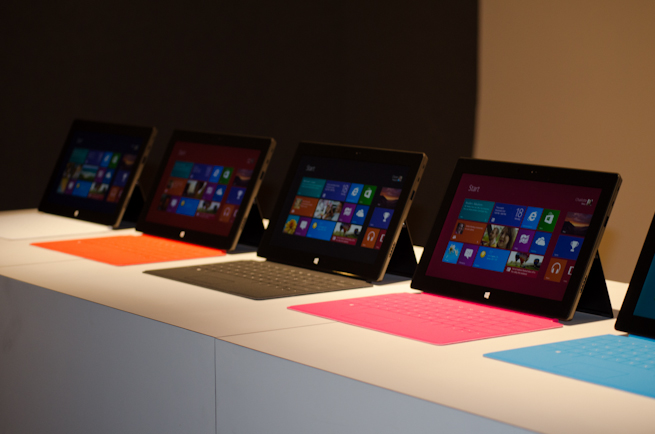 The Type Cover is a 5.5mm thick mechanical full QWERTY keyboard that uses a chiclet design, and is easy to type on (though there is very little space between the individual keys). Both connect to the bottom of any Surface tablet and lock in place magnetically. Thanks to the Surface’s accelerometer, the cases won’t activate the keys when the keyboard is used as a cover and held behind the tablet. The connector used is proprietary; it’s unclear if Microsoft expects additional peripherals from 3rd party manufacturers to be viable through it. 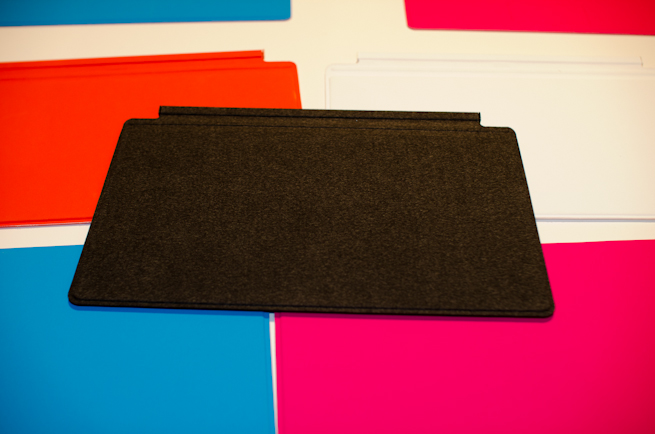 Above: The Touch and Type Covers come in five colors altogether, all with different feeling covers

With the kickstand and one of the two keyboards, the Surface can instantly turn into a laptop-shaped device. This is particularly exciting for tablet owners who have been purchasing accessories for their devices and who are still unsatisfied with both first and third party accessories. And because the Surface runs Windows, both keyboards also sport multitouch trackpads (though they are very small). But with a full touchscreen, the trackpad’s size isn’t likely going to be a big deal. 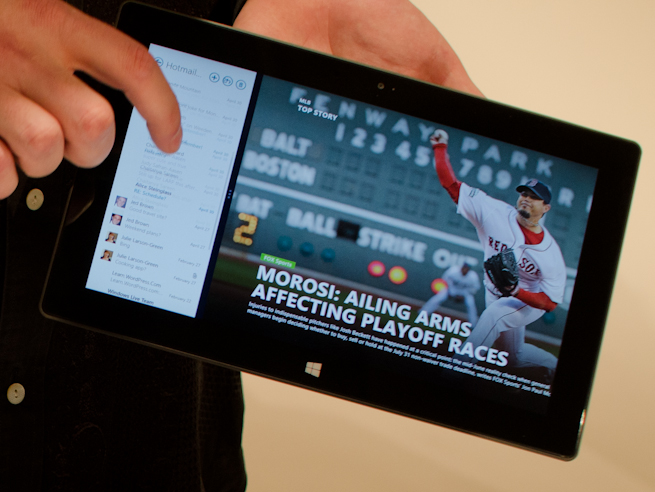 Surface has an LCD panel using ClearType technology. Microsoft hasn’t revealed anything about ClearType except that it’s designed to make the high resolution display appear very clear. It has no relation to Nokia’s ClearBlack screen technology used on their recently released Lumia 900 smartphone. (Microsoft also calls its font smoothing technology ClearType.) Microsoft has been very mum on the display, and hasn’t shown the screen in use much.

Surface has a 10.6″ widescreen display, and while the screen is actually larger than Samsung’s Galaxy Tab 10.1, the device feels smaller. The two Surface models have different screen resolutions; the RT model uses a 720p display while the Pro model is full 1080p.

In terms of hardware, the Surface includes a USB 2.0 connector, which already appears outdated in light of USB 3.0 ports showing up on more computer (update: the Surface Pro has USB 3.0). It charges through a separate magnetic connector on the side, similar to the Sony Tablet S. Surface also uses two Wi-Fi antennas to minimize blocking the network when holding the device. There are twin microphones on the top of the device, and stereo speakers on both sides. A Windows home button rests below the display on the bezel. There is also a single HDMI video out port that can output 1080p.

Microsoft has also remained quiet regarding software. The two Surface models use different versions of Windows, Windows 8 RT and Windows 8 Pro. The RT model is based on ARM processors, while the Pro version is for Intel chipsets. That means RT is a more traditional tablet experience, and because of that it’s limited to only running Metro Windows 8 apps. Pro is for users who want a full Windows laptop experience, including the ability to run legacy software.

There will be some Xbox integration, including the recently announced SmartGlass screen sharing technology,as well as some games completely playable over Xbox Live. Games playable on the Surface will have to be developed specifically for it. Gamers won’t instantly be able to play any game on Surface, nor will they be able to stream titles via Wi-Fi to the Surface tablet (no news of such has been announced).

Surface looks like a very interesting piece of hardware, and is indeed a bold new direction for Microsoft. After years of seriously limiting any hardware development, with notable exceptions to the Zune and Xbox, Microsoft is stepping into the hardware game in a very significant way. By offering a tablet-esque operating system, as well as a full Windows 8 traditional computer experience, Microsoft will be able to set the Surface apart from the iPad and Android tablets in a big way.

Surface is set to release the RT version with Windows 8 for an undisclosed price in 32GB and 64GB models. The Windows 8 Pro model will release three months after in 64GB and 128GB models.